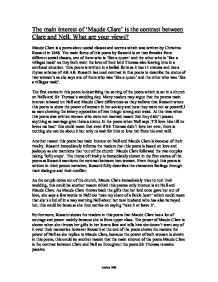 The main interest of Maude Clare by Christina Rossetti is the contrast between Clare and Nell. What are your views?

The main interest of 'Maude Clare' is the contrast between Clare and Nell. What are your views? Maude Clare is a poem about social classes and secrets which was written by Christina Rossetti in 1848. The main focus of this poem by Rossetti is on two females from different social classes, one of them who is 'like a queen' and the other who is 'like a villages maid' as they both want the love of their lord Thomas also leaving him in a confused situation. This poem is written in a ballad form as it has 11 stanzas and has a rhyme scheme of AB AB. Rossetti has used contrast in this poem to describe the status of two women's as she says one of them who was 'like a queen' and the other who was 'like a villages maid'. The first stanza in this poem is describing the setting of the poem which is set in a church on Nells and Sir Thomas's wedding day. ...read more.

a way warning Nell about her new husband who has also betrayed her, this could be because she then carries on saying "take it or leave it'. Furthermore, Rossetti shows the readers in this poem that Maude Clare has a lot of courage and power mainly because she is from upper class. The power of Maude Clare is shown when she throws her gifts in her lovers face and tells him she doesn't want any of it even their memories however Rossetti at the end of the poem shows the readers the power of Nell as she replies to Maude Clare, because the power of both women is shown in this poem, this could be another reason that the main interest of the poem Maude Clare is the contrast between Clare and Nell as throughout the poem Sir Thomas remains passive. However, some reader may disagree that this poems only main interest is the contrast between Maude Clare and Nell because they believe that this poem also looks at the fact that the power Sir Thomas had on Maude Clare when he was with him and how he also controlled Maude Clare. ...read more.

Rossetti in this poem has made the narrator unknown as the identification of the narrator is a bit confusing allowing the reader freedom to wonder and draw their own conclusions as to who the narrator can be. This can make the readers feel that maybe Rossetti has made Sir Thomas's father the narrator because he is also mentioned in the poem as Thomas's mother mentions 'your father thirty years ago had just your tale to tell' this could mean maybe sir Thomas's mother remembered this while the father was standing next to her and Sir Thomas. From my perspective I certainly believe that the main reason which Rossetti wrote this poem was show the contrast between Nell and Maude Clare, she makes the readers emphasize for Nell more because of what Maude Clare says to her. Rossetti also represents prominent female figures in Victorian society as she informs the readers about the jealousy and hatred that existed between women. The theme of secrecy and betrayal runs throughout this poem as the readers are informed from reading the poem and analyzing the text written by Rossetti. ?? ?? ?? ?? Amina Bibi ...read more.