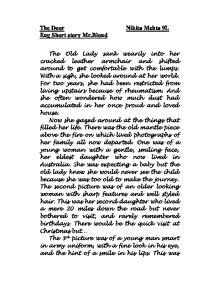 The Old Lady sank wearily into her cracked leather armchair and shifted around to get comfortable with the lumps. With a sigh, she looked around at her world. For two years, she had been restricted

The Door Nikita Mehta 9L Eng Short story Mr.Blond The Old Lady sank wearily into her cracked leather armchair and shifted around to get comfortable with the lumps. With a sigh, she looked around at her world. For two years, she had been restricted from living upstairs because of rheumatism. And she often wondered how much dust had accumulated in her once proud and loved house. Now she gazed around at the things that filled her life. There was the old mantle piece above the fire on which lived photographs of her family all now departed. One was of a young woman with a gentle, smiling face, her eldest daughter who now lived in Australia. She was expecting a baby but the old lady knew she would never see the child because she was too old to make the journey. ...read more.

The fading light of the dying day through long shadows over the old black and white television set with its snowy screen and crackling sound. Outside the small rear garden and shed were old, unused tools rusted. Suddenly she heard the rapping of her front door knocker. She knew from its impatience sound that it would be...her landlord. His father had been the previous landlord and over the years showed himself to be a fair man. If there hadn't been enough money to pay the rent he would trust, them to pay it later. He cared for his tenants. The son, however, was very different, impatient and interested only in money. He wanted the old lady out of his house so that he could sell the street to a supermarket complex. All the other tenants had left but were was she to go? ...read more.

It was then that she noticed sunlight streaming through her front door. The door which swung open slowly, revealed a silhouetted figure that was just standing there. She felt a connection with that figure. As the figure moved closer she saw that it was a young man who was making its way along the hall and then she saw, with a start, that it was a young man dressed in army uniform. He had a fine look in his eyes, a firm set to his jaws and a hint of a smile on his lips. He reached out his hands towards her as she felt herself moving out of the chair without any pain Then he spoke, 'come it has been long. Come with me.' She took his hand. Together they walked in harmony, along the hall and walked out where there was the sound of children playing and sunlight brightening up the street. They passed through the door it closed slowly on them...for eternity. By Nikita Mehta 9L ...read more.