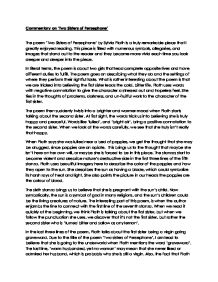 The poem Two Sisters of Persephone by Sylvia Plath is a truly remarkable piece that I greatly enjoyed reading. This piece is filled with numerous symbols, allegories, and images that stand out

Commentary on 'Two Sisters of Persephone' The poem 'Two Sisters of Persephone' by Sylvia Plath is a truly remarkable piece that I greatly enjoyed reading. This piece is filled with numerous symbols, allegories, and images that stand out to the reader and they become more vivid each time you look deeper and deeper into the piece. In literal terms, the poem is about two girls that lead complete opposite lives and have different duties to fulfill. The poem goes on describing what they do and the settings of where they perform their rightful tasks. What is rather interesting about the poem is that we are tricked into believing the first sister leads the cold, bitter life. Plath uses words with negative connotation to give the character a stressed out and hopeless feel. She ties in the thoughts of problems, darkness, and un-fruitful work to the character of the first sister. ...read more.

She also paints the picture in our heads the poppies are the colour of blood. The sixth stanza brings us to believe that she is pregnant with the sun's child. Now symbolically, the sun is a symbol of god in many religions, and the sun's children could be the living creatures of nature. The interesting part of this poem, is when the author enjambs the line to connect with the first line of the seventh stanza. When we read it quickly at the beginning, we think Plath is talking about the first sister, but when we follow the punctuation she uses, we discover that it's not the first sister, but rather the second sister who is 'turned bitter and sallow as any lemon'. In the last three lines of the poem, Plath talks about the first sister being a virgin going graveward. Due to the title of the poem 'Two sisters of Persephone', I am lead to believe that she is going to the underworld when Plath mentions the word 'graveward'. ...read more.

Plath writes her poem in free verse with occasional rhymes in the third fourth and first line of the fifth stanzas. In the sixth, she rhymes 'bride' with 'pride'. Her tone throughout the poem is rather frank, and a tad depressing when you get to the end. My opinion on this piece is that it is strangely dark in a beautiful way. The more you work into the piece, the more you understand Plath's thoughts when she was writing the piece. To me, I can relate to this because, I understand the double role of having to cope with family life and school and sometimes juggling both at the same time can be depressing, or troublesome. I also believe that a large portion of this poem is an allegory and how anyone perceives the poem is upon the individuals opinions and thoughts. A large portion of the poem is an allegory- meaning it has another meaning than its physical statement. How we perceive the poem is upon our own opinions- but consider this! ...read more.