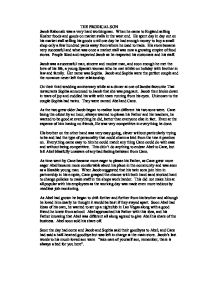 The prodical son - Jacob Rabonsik was a very hard workingman. When he came to England selling Kosher foods and goods on market stalls in the west end.

THE PRODICAL SON Jacob Rabonsik was a very hard workingman. When he came to England selling Kosher foods and goods on market stalls in the west end. He spent day in day out on his market stall selling his goods until one day he had enough money to buy a small shop only a few hundred yards away from where he used to trade. His store became very successful and what was once a market stall was now a growing empire of food stores. People liked and respected Jacob as he respected his customers and his staff. Jacob was a successful man, sincere and modest man, and soon enough he met the love of his life, a young Spanish woman who he met whilst on holiday with brother in law and family. Her name was Sophia. Jacob and Sophia were the perfect couple and the romance never left their relationship. On their third wedding anniversary while at a dinner at one of Jacobs favourite Thai restaurants Sophia announced to Jacob that she was pregnant. Jacob then broke down in tears of joy and cuddled his wife with tears running from his eyes. ...read more.

There was always a new woman on his arm. Always a poker game to look forward to and always the poker game he had to play to win his money back. Abel's addictive nature had begun to get the better of him. First gambling and sex, then drink, soft drugs, and sooner rather than later the harder drugs. The money began to drain out of Abel's bank account rapidly and as it did the women began to leave him laughing in his face. His best friend was becoming more and more aware of the habits Abel had picked up. He soon to became fed up with Abel flittering away all of the profit so he said to him "we need to invest to grow, we can't do this if you carry on like you are" Abel just laughed and replied "Your not my Father". As he said this head sank as he knew his Father would be appalled and deeply upset with his behaviour. At that point his friend got up and left Abel. Abel had now become an embarrassment to be around and had no friends; even the enthusiasm in his charm had left him. ...read more.

Also was a letter begging for Abel to return home. Abel broke down in tears. He then jumped up and went straight to the airport and boarded the next plane home. Almost a day later he came to his house walked up to the front door where Cane his brother answered the door and said, "I thought I told you, Jacob is not interested in you any more". Abel replied "I thought you were my brother, and I thought you loved me why have you done this to me" At that point Jacob pulled up in his car and looked at Abel. Jacob hadn't shaved and looked almost as bad as Abel. He ran to his son with tears in his eyes and said "my son you are home, where have you been my son" looking over his Father's shoulder at a dismayed Cane he replies "I am here now Father, back home where I should be with my Father Mother ad my Brother". Just then Sophia came running down the stairs, "What is all that, oh my lord your home". Cane looked at his Brother and his parents crying and burst out into tears. Jacob then said, "Sophia call the maid, tell her to go to my shop and get the most expensive meat she can find, and I will call the family, we must celebrate" ...read more.