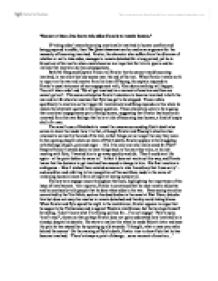 THe Quiet American - Sooner or Later, one has to take sides

"Sooner or later, One has to take sides if one is to remain human." If 'taking sides' means becoming emotionally involved in human conflicts and being prepared to suffer, then The Quiet American can be read as an argument for the necessity of becoming involved. Fowler, the character who suffers from the dilemma of whether or not to take sides, manages to remain detached for a long period, yet he is forced out of his inertia when events become too important for him to ignore and he realizes that inaction also has consequences. Both Mr Heng and Captain Trouin tell Fowler that he cannot avoid becoming involved, in two short but key scenes near the end of the text. When Fowler travels north to report on the war and recover from his loss of Phuong, the captain responds to Fowler's usual statement of non-engagement with, 'One day something will happen. ...read more.

In the opening chapter when we learn of Pyle's death, Fowler appears to be struggling with feelings of guilt, pain and anger - 'Am I the only one who really cared for Pyle?' Despite Fowler's stated desire to have things back to the way they were, at his last meeting with Pyle, 'I wanted him to go away quickly and die. Then I could start life again - at the point before he came in'. In fact it does not work out this way, and Fowler learns that his decision to get involved has caused a change in him. His final reaction is ambiguous - How I wished there existed someone to who I could say that I was sorry' - and could be read referring to his recognition of the sacrifices made in the name of remaining human almost a form of regret at having acted at all. ...read more.

He starts to realize this when he reads Helen's letter and sees the pain he has caused her by opening up old wounds: 'I thought, what a mess you make behind the scenes' On the evening of Pyle's death, Fowler tries to show Pyle that he has become involved: 'There's always a point of change...some moment of emotion...' Although Pyle cannot recognize it, we know that Fowler has committed himself to action in the name of what he feels is morally right. Fowler eventually recognizes that he must act in order to stay human because he is at risk of causing trouble even while he maintains a neutral stance. It therefore appears preferable to act in a positive manner, trying to achieve good through what one is doing, than by unintentionally causing suffering, as he has done to his wife in the past. His ambiguous feelings about his actions show that he finally accepts becoming human again through suffering. ...read more.