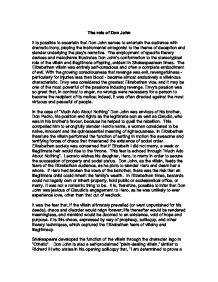 The role of Don John

The role of Don John It is possible to ascertain that Don John serves to entertain the audience with dramatic irony, playing the instrumental antagonist to the theme of deception and slander underlying the play's narrative. The employment of specific literary devices and melodrama illustrates Don John's conformation to the stereotypical role of the villain and illegitimate offspring, evident in Shakespearean times. The Elizabethan villain was entirely self-conscious and often a complete embodiment of evil. With the growing consciousness that revenge was evil, revengefulness - particularly for injuries less than blood - became almost exclusively a villainous characteristic. Envy was considered the greatest Elizabethan vice, and it may be one of the most powerful of the passions inducing revenge. Envy's passion was so great that, in contrast to anger, no wrongs were necessary for a person to become the recipient of its malice; indeed, it was often directed against the most virtuous and peaceful of people. In the case of "Much Ado About Nothing" Don John was envious of his brother, Don Pedro, his position and rights as the legitimate son as well as Claudio, who was in his brother's favour, because he helped to quell the rebellion. This compelled him to wrongfully slander Hero's name, a woman considered to be na�ve, innocent and the quintessential meaning of righteousness. ...read more.

It is possible to infer that Don John appears to the audience as very brooding and potentially threatening. He is truthfully a man of not many words, but one who listens intently for any information or knowledge that may serve his own purpose. Very early on, the central characters establish his speech as often ambiguous. Later on in Act 1 Scene 3, he airs his grievances to his followers Conrade and Borachio. Borachio falsely relays information of a plan for Don Pedro to woo Hero for himself and give her to Claudio. Don John subsequently dedicates himself to revenge against Claudio, for placing himself in his brother's favour. Don John's resentment of Claudio is bitter; "that young start-up hath all the glory of my overthrow." His scheming nature conforms to the stigmatised prejudice against bastards in Elizabethan society. The audience is able to establish that whilst Don John is inherently evil, he is in addition an opportunist, who will prey on any suitable situation that comes his way; "will it serve for any model to build mischief on". His overuse of the first person, serves to illustrate his egocentricity and self-dramatisation; "I am a plain dealing villain, seek not to alter me". His refrain from use of euphemistic language which is still very metaphorical, emphasises his role in the play as the villain, driven by jealousy of Don Pedro and Claudio for his illegitimate status; "I am trusted with a muzzle and enfranchised with a clog". ...read more.

Don John has exaggerated her crimes and then proceeds to justify them, in order to show compassion on his part; "There is not chastity enough in language, without offence to utter them: thus pretty lady, I am sorry for thy much misgovernment". Presently the watch makes the people of Messina aware of Don John's dishonesty, however he manages to escape. The play concludes with news that Don John has been captured. This is a conventional ending because it served to reassure Elizabethan society that villains would be punished for their wrongdoings. In conclusion, Don John, although he is not one of the main protagonists, he provides the epitome of the theme of deception which links all the central characters by the various methods in which they are deceived. He is portrayed as the archetypal Shakespearean villain, motivated in wickedness by the fact that he is an illegitimate child. His underlying antagonism is the catalyst for the slander of Hero and Claudio's denunciation of her at the church. However, the role of the villain was essential to Elizabethan society because it served to reassure the constant victory of good over evil. In a society and historical period where England was under the threat of invasion from Spain and France and likely to be subjected to religious unrest, it restored confidence to people that the triumph over villainous characters and ideals was inevitable. ?? ?? ?? ?? ...read more.