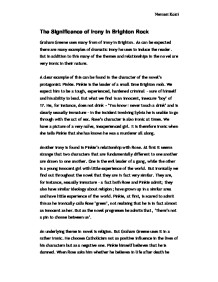 The Significance of Irony in Brighton Rock

The Significance of Irony in Brighton Rock Graham Greene uses many from of irony in Brighton. As can be expected there are many examples of dramatic irony he uses to induce the reader. But in addition to this many of the themes and relationships in the novel are very ironic in their nature. A clear example of this can be found in the character of the novel's protagonist: Pinkie. Pinkie is the leader of a small time Brighton mob. We expect him to be a tough, experienced, hardened criminal - sure of himself and his ability to lead. But what we find is an innocent, insecure 'boy' of 17. He, for instance, does not drink - 'You know I never touch a drink' and is clearly sexually immature - in the incident involving Sylvia he is unable to go through with the act of sex. Rose's character is also ironic at times. ...read more.

But as the novel progresses he admits that, 'There's not a pin to choose between us'. An underlying theme in novel is religion. But Graham Greene uses it in a rather ironic. He chooses Catholicism not as positive influence in the lives of his characters but as a negative one. Pinkie himself believes that he is damned. When Rose asks him whether he believes in life after death he replies that he believes in hell. He believes that there is no point in doing good - he is destined for hell - 'between the stirrup and the ground' but that before his time comes he can repent. Pinkie believes he has reached hell after he has performed the mortal sin with Rose - after that he feels nothing can get worse. The influence of religion in Rose's life is also inversed; after she has performed the mortal sin with Pinkie she feels she has 'emerged from pain to... ...read more.

However, at the race course Pinkie finds that Colleoni's mob also attacks him as well. Ironically, however, at the end of the day neither of them has been killed. The record of Pinkie's voice is also very ironic. For Rose holds this as the one thing Pinkie has given to her - a token, a symbol of their love. However, on the record it says, 'God damn you, you little bitch, why can't you go back home for ever and let me be?' At the very end of the book she looks upon this record as a sign of whether he loved her or not. The death of Hale is also particularly significant. For it is ironic that on a very busy summer's day, with a bustling crowd Hale is unable to find company, security. He still feels lonely despite the presence of many thousands of people. Navneet Kokri ...read more.