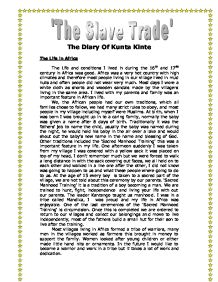 'The slave trade' - The Diary Of Kunta Kinte The Life in Africa.

The Diary Of Kunta Kinte The Life in Africa The Life and conditions I lived in during the 16th and 176h century in Africa was good. Africa was a very hot country with high climates and therefore most people living in our village lived in mud huts and often people did not wear very much. Most days I wore a white cloth as shorts and wooden sandals made by the villagers living in the same area. I lived with my parents and family was an important feature in African life. We, the African people had our own traditions, which all families chose to follow, we had many strict rules to obey, and most people in my village including myself were Muslims. At birth, when I was born I was brought up in to a caring family, normally the baby was given a name after 8 days of birth. Traditionally it was the fathers' job to name the child, usually the baby was named during the night, he would hold his baby in the air over a lake and would shout out the baby's new name in the name and blessing of God. Other traditions included the 'Sacred Manhood Training' this was a important feature in my life. One afternoon suddenly I was taken from my village I was covered with a yellow sack it was placed on top of ...read more.

metal chains, as I looked around I saw the horrid site of white men throwing black people in to cages as if we heartless animals. Many of the people were kidnapped by raiding villages across Africa or along coasts I did not know was going to happen to us and what these people where going to do to us, I was frightened but I tried to stay brave and I knew nobody could tear me and away from my family. A couple of hours later we were moved from the cages and we were put in iron neck rings and linked together with our hands and ankles. We were later transported on to ships I had never been on ships or even seen the sea before, it was strange but also frightening. It took between forty and sixty days crossing from Africa to America. The white people often called us niggers and slaves. When a slave ship was due to leave many sailors loaded us as cargo of captives. On board we were stripped naked by white people. Men and women were placed on to separate compartments and many of us were chained in pairs to prevent us from escaping. Each compartment was approximately 1.52 meters long. It was uncomfortable and unhygienic. ...read more.

I have always made a promise that I would return to Africa and some day I will, to see my village, friends and family, working as a slave was not how I think people should live their life. Someday I know I will return to the tribe of Mandika. The Slave Trade Three years after my experience of the slave trade and the conditions I suffered in, I remember the time as if it was yesterday. I asked many people about the slave trade, The slave trade was a very profitable trade of many countries. In the 15th century Europe explored different lands and discovered Africa and their civilisation. The Europeans had planned to go to Africa and capture men and women as captives and transport them to America on ships. At the time African black people were considered as goods which were to be sold and brought, many often thought of them as animals. By the 18th century , many countries voted to end the slave trade. The abolition of slavery took place when the British began to build a committee together, as a group they all decided to put an end to slavery, as a result it took almost 10 to 15 years to abolish the trade. The slave trade was world wide event and the terrible effects the black people suffered should not be experienced again. By Poonam Patel 9/4 ...read more.