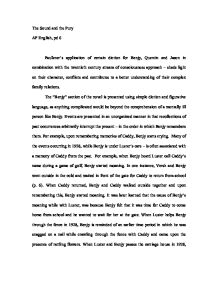 The Sound and the Fury. Faulkners application of certain diction for Benjy, Quentin and Jason in combination with the twentieth century stream of consciousness approach sheds light on their character, conflicts and contributes to a bette

The Sound and the Fury AP English, pd 6 Faulkner's application of certain diction for Benjy, Quentin and Jason in combination with the twentieth century stream of consciousness approach - sheds light on their character, conflicts and contributes to a better understanding of their complex family relations. The "Benjy" section of the novel is presented using simple diction and figurative language, as anything complicated would be beyond the comprehension of a mentally ill person like Benjy. Events are presented in an unorganized manner in that recollections of past occurrences arbitrarily interrupt the present - in the order in which Benjy remembers them. For example, upon remembering memories of Caddy, Benjy starts crying. Many of the events occurring in 1928, while Benjy is under Luster's care - is often associated with a memory of Caddy from the past. For example, when Benjy heard Luster call Caddy's name during a game of golf, Benjy started moaning. In one instance, Versh and Benjy went outside in the cold and waited in front of the gate for Caddy to return from school (p. 6). When Caddy returned, Benjy and Caddy walked outside together and upon remembering this, Benjy started moaning. It was later learned that the cause of Benjy's moaning while with Luster, was because Benjy felt that it was time for Caddy to come home from school and he wanted to wait for her at the gate. When Luster helps Benjy through the fence in 1928, Benjy is reminded of an earlier time period in which he was snagged on a nail while crawling through the fence with Caddy and came upon the presence of rattling flowers. ...read more.

The "Quentin" section of the novel, presents much more complex ideas with a moral basis than did the "Benjy" section of the novel although Quentin's thoughts frequently jump from one idea to another. Quentin's ideas and concerns centrally revolve around Caddy's loss of virginity and saving her from shame. For example, when he learned of Caddy's pregnancy, he thought of both of them running away from home and living on the money set aside for his Harvard University tuition or they could both commit suicide. It is fascinating to see how much Quentin spends most of his life worrying and trying to protect Caddy because she was the motherly figure in his life - it was through her that he learned of women and love and other necessities in life. It is seen that he values Caddy the most in the Compson household and he considers his relationship with her as the most important relationship in his life that he decides to tell his father that he committed incest with Caddy. But Quentin is left deserted when his father does not take Caddy's loss of virginity as a serious issue and merely thinks of virginity as a term that men invented and does not need to be paid much attention to. The "Jason" section of the novel is simple narrative than the "Benjy" and "Quentin" section because he is obsessed with money and revenging other's deeds that he is not troubled with any weaknesses of life. ...read more.

On the other hand, Benjy, Quentin and Caddy longed for their mother's love but they didn't get it. He did not get along with his siblings either because he never connected with them on a personal level as he was self-absorbed. Faulkner uses symbolism to emphasize a ideas. Water is a recurring symbol of purity in the novel. The Compson siblings playing in the branch and Caddy muddying her drawers while playing in the stream foreshadows Caddy's promiscuity in the later years to come. Here, Caddy was able to wash the dirt off and purify herself but in the future she is not able to wash off her sins. When Benjy smells Caddy wearing perfume during her virginal state, he gets mad because she no longer smells like trees. So he forces her to wash the perfume away, which symbolizes water's cleansing ability as it represents washing away her sin. After kissing Charlie on the swing in the presence of Benjy, Caddy was able to wash off her sin by washing her mouth with soap. When Caddy lost her virginity, years later, Benjy sensed that something was different about her. So he attempted to push Caddy into the bathroom so she could wash off her sins. But Caddy was not able to look directly at Benjy throughout this situation because she knew that washing herself would not be able to bring herself back to her virginal state. Water can also be a symbol of death because Quentin commits suicide by drowning himself. In this situation, water appears to have a cleansing ability because ending his life by jumping in the water, will relieve him from constantly worrying about Caddy's loss of virginity. ...read more.