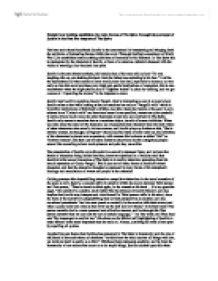 Explain how Golding establishes the main themes of The Spire through his portrayal of Jocelin in the first five chapters of The Spire. The bent and twisted hunchback Jocelin is the cornerstone for interpreting and bringing forth the multitude of interesting themes within the novel. Through Golding's experience of World War II, he established many scathing criticisms of humanity in his literature. In The Spire this is represented by the character of Jocelin, a Dean of a nameless cathedral obsessed with the vision of erecting a four-hundred foot spire. Jocelin is the penultimate antihero, the introduction of the story tells us how "He was laughing chin up, and shaking his head. God the father was exploding in his face." It defies the expectations of what context a Dean would place God into, especially in humour, so very early on into this novel are these very slight and gentle implications of corruption, this is also exacerbated when the slight phallic pun of "Eighteen inches" is joked by Golding, and we get a sense of..."expecting the reverse" in the chapters to come. Jocelin later lustfully examines Goody Pangall, what is interesting to note is to note is how Jocelin refers to her while looking ...read more.

Almost, justifying his work of the spire by expelling all qualms. Another frequent theme that Golding has presented in The Spire is immaturity and the role of childhood in the motivations of character. "to think how the mind touches all things with law, yet decieves itself as easily as a child," Childhood here represents stupidity, and its from the immaturity of our actions that cause us to do stupid things, Jocelin touches upon this when examining Goody Pangall, "She is entirely woman, he thought, loving her; and this is foolish, this childish curiosity shows it." surprisingly this is the rare times where we see Jocelin refuting himself rather than justifying himself. Its also worth noting that this is not the first time that Golding has used children to carry his critique of humanity, in Lord of the Flies we are shown the adult behaviour's and faults reflected in children, Golding uses this as a metonym to describe that the entire faults of human behaviour are the attempts to recreate childhood and to be free from responsibility, that we give birth to the belief that anything is possible and everything is allowed. ...read more.

claiming these own visions as his own, and more relatively, attempting the to grasp the power of God in his own spindly hands. That is not the holiest prophecy; that is the most devious heresy. Its through Jocelin's arrogance does the issue or theme of pride arise, Its when we place ourselves above other people and see ourselves as higher, that we try to recreate our image into some sort of powerful deity or demigod which cannot be dominated, which Golding has shown to have a very ironic sense of humour by using Jocelin to represent religion; the very thing expected to fight pride, becomes the very thing to personify it. Perhaps its inevitable to become the thing you pretend to be. The ultimate Theme of this book is humanity, Golding's written account of the faults in humanity is found clearly in The Spire through Jocelin, its only through relating to Jocelin, and placing ourselves within his persona, can we really understand him deeply The biggest point however, is that when you explain behaviour and people by relating it to yourself, you can no longer hate them or fear them, you will always respect them neutrally, because you can always find the same desires in your own heart. Adnaan Osmani "Dalai lama recently fitted my third eye with new contact lenses." ...read more.