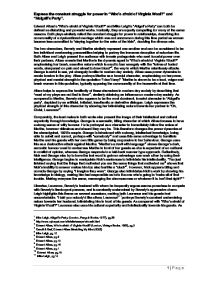 The struggle for power in Abigail's party and Who's afraid of Virginia Woolf?

Edward Albee's "Who's afraid of Virginia Woolf?" and Mike Leigh's "Abigail's Party" can both be defined as disturbing and powerful works. Ironically, they are equally compelling for many of the same reasons. Both plays similarly reflect the constant struggle for power in relationships, describing the commonality of a dysfunctional marriage which was not uncommon during this time period as women became less committed to "staying together for the sake of the kids"1, doubling the divorce rate. The two characters, Beverly and Martha similarly represent one another and can be considered to be two individual overbearing personalities helping to portray the immense deception of suburban life. Both Albee and Leigh present the audience with female protagonists who exert forceful power over their partners. Albee reveals that Martha is the dynamic agent in "Who's afraid of Virginia Woolf?" emphasising her brash, assertive nature which is used to tear savagely with the "knives of hurled words, sharpened on pain and aimed to draw blood"2, the way in which Martha relentlessly attacks George is awful to see, yet strangely familiar in modern day society. ...read more.

George is a sarcastic, biting character of which Albee focuses to have a strong sense of witty humour. He is portrayed as a character to immediately follow the orders of Martha, however ridiculous and absurd they may be. This therefore changes the power dynamics of the stereotypical, 1920's couple. George is introduced with a strong, intellectual knowledge, being able to outwit and correct, perhaps with "somebody"6 and uses this same advantage to humiliate Martha and his guests with her own little game by being responsive to her behaviour. George uses this as a destructive attack against Martha. "Martha's a devil with language"7 shows George's dark, sarcastic humour used to embarrass Martha in front of her guests as she is expectant of an outburst in conflict of opinion, whereas George responds in a laid-back manner type approach. Reflectively, Nick and George also try to have the last word to gain an advantage over each other by using their intelligence. ...read more.

Laurence also uses his cultural superiority and intellectuality towards his guests. As he aspires to the finer things in life, Laurence enforces his knowledge on his guests at unfortunate moments. Nick and George have already been portrayed to be in direct competition towards each other, whereas Laurence and Angela may also have a similar rivalry when he corrects her about Tudor houses in attempt to appear more cultured and refined. "No Angela - Mock Tudor"12 is a direct representation of Laurence's attempt to show his intellectual knowledge, yet again exerting power over his guests through mockery. 1 Mike Leigh, Abigail's Party, (London, Penguin Books, 1977), pg.26 2 http://www.cyberpat.com/shirlsite/essays/whosafr.html 3 Edward Albee, Who's afraid of Virginia Woolf? (London, Vintage Books, 1963), pg.3 4 Carroll & Graf, Edward Albee Stretching My Mind (2005) 5 Mike Leigh, pg.10 6 Edward Albee, pg.2 7 Edward Albee, pg.10 8 Edward Albee, pg.15 9 Edward Albee, pg.1 10 Edward Albee, pg.18 11 Mike Leigh, pg.14 12 Mike Leigh, pg.55 ?? ?? ?? ?? Express the constant struggle for power in "Who's afraid of Virginia Wool?" and "Abigail's Party". 1 | Page ...read more.