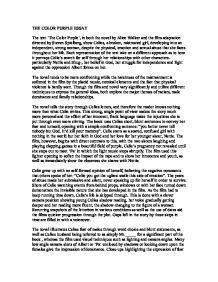 The text The Color Purple, in both the novel by Alice Walker and the film adaptation directed by Steven Spielberg, show Celies, a broken, mistreated girl, developing into an independent, strong woman,

The text ‘The Color Purple’, in both the novel by Alice Walker and the film adaptation directed by Steven Spielberg, show Celies, a broken, mistreated girl, developing into an independent, strong woman, despite the physical, emotion and sexual abuse that she faces throughout her life. Each representation of the text take on a different approach as to how it portrays Celie’s search for self through her relationships with other characters-particularly Nettie and Shug-, her belief in God, her struggle for independence and fight against the oppression Albert forces on her.

The novel tends to be more confronting while the harshness of the mistreatment is softened in the film by the placid music, comical elements and the fact that physical violence is hardly seen. Though the film and novel vary significantly and utilize different techniques to express the general ideas, both explore the major themes of racism, male dominance and family relationships.

The novel tells the story through Celies letters, and therefore the reader knows nothing more than what Celie writes. This strong, single point of view makes the story much more personal and the effect of her innocent, frank language make the injustices she is put through even more stirring. The book uses Celies short, blunt sentences to convey her fear and turmoil, opening with a simple confronting sentence: “you better never tell nobody but God. It’d kill your mammy”. Celie starts as a scared, confused girl with nothing in the world but her faith in God and her love for her younger sister, Nettie. The film, however, begins with direct contrasts to this, with the two sisters laughing and playing clapping games in a beautiful field of purple, Celie’s pregnancy not revealed until she steps out to meet ‘Pa’ in which the light music stops abruptly. The film used this lighter opening to soften the impact of the rape and to show her innocence and youth, as well as immediately show the closeness she shares with Nettie.

Celie grew up with no self-formed opinion of herself, believing the negative comments that others spoke of her: “Celie you got the ugliest smile this side of creation”. The years of abuse made her submissive and silent, never speaking up for herself in order to survive. Shots of Celie watching events from behind props, windows or with her face turned down demonstrate the invisible nature that she has developed in the film. As the film had to keep running time down, Celie’s life is skipped through. This is done with a clever camera position showing young Celies shadow reading, her voice gradually getting deeper and her reading more fluent, the shadow changing to the figure of a woman. Recurring snapshots of the letterbox in various conditions as well as the use of dates aid the films quicker progression through the plot. Gaps left in the story by these skips in time are filled in with a voiceover.

The novel illustrates Celies fear of males through word choice and blunt statements, as well as Celies husband being referred to as simply Mr._____ for a significant part of the book , whereas the film used visual techniques such as lighting and camera angles. Many low angle camera shots of Albert or ‘Pa’ enclosed by shadows or looking down upon the females give the impression of dominance. Close-ups highlighting the expression of fear on Celie’s face or at sinister intentions of the male characters at the start of the film compared to the close ups of Celie as a confident woman after she found her identity show the change that she has undergone.

This change in Celie occurs with the introduction of Shug and Sofia into her life. The two contrasting women are both strong and free and teach Celie that women do not have to be ruled by men. Celies main influence is Shug, who is loved by Albert as well as Celie, whose attachment to Shug is depicted through her primary role in the story of Celies life. Shug plays an extremely imperative part in Celies search for self by being the affectionate, encouraging person that Celie always needed. Most importantly, she teaches Celie to love herself and be happy with whom she is as a person. Shug opens Celies mind by removing other peoples influence on her belief in God, explaining that “not being tied to what God looks like frees us”.

The turning point in both the book and the novel is when Celie discovers that Albert has hidden Nettie’s letters from her for all these years. Her love of Nettie, who she believes to be “the only one to ever love me” had helped her to stay strong through the years and endure Albert’s abuse. When she finds that he had been keeping Nettie from her, her rage breaks her fear of him and gives her the courage to leave the house and move to Memphis with Shug. Albert summarizes what he believes to be her weaknesses when he says “You black, you poor, you ugly, you a woman. Goddamn you nothing at all”. Celies retaliation by cursing him with “everything you even think about is going to fail until you do right by me” shows just how far she has come already. Albert’s insult poses a challenge for Celie. She goes out to find happiness and become self-sufficient, despite Albert’s condemnation.

The novel looks at the progress that Celie makes with her sewing of pants. This is symbolic of the protest against discrimination against women and is a major part of Celie’s search for self. The film however skips through this, instead focusing on the symbolism of the purple field in Celie’s happiest moments-her childhood with Nettie, her walk with Shug after she returns home a successful woman and her reuniting with Nettie at the very end.

The conclusion of the novel seemed to be much more rounded, with all the strings of the past woven neatly into a final letter in which she addresses “Dear God. Dear stars, dear trees, dear sky, dear peoples. Dear everything. Dear God”. In this letter we find out that Nettie and her husband, Olivia, Adam and Adams wife have returned home from Africa. Celie and Nettie now have their own house, after finding out the truth about their ‘Pa’, Shug as come back to Celie, Sofia and Harpo are once again happy together and Celie  has forgiven Albert for the past, now valuing him as a friend. It is this connection that eventually brings them together as friends.

Though the film and novel vary significantly and utilize different techniques to express the general ideas, both explore the major themes of abuse, oppression, male dominance and family relationships. The central character, Celie, finds her identity through the help of those she loves and her personal strength to accept the past and move on with the future.