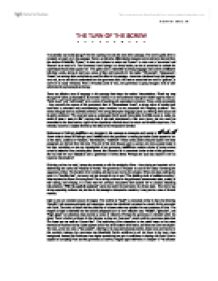 The turn of the screw.

THE TURN OF THE SCREW COURSEWORK "I must take my horrid plunge" from the opening line sets the tone of the passage. The novel's gothic form is revealed very early on in the passage. There is a distinctive differentiation between horror and terror derived from the studies of Radcliffe. "Terror" is when one induces to action and "horror" is when one is "powerless" and "freezes" as a result of it. The Governess' horrid plunge is a forced action, as she is powerless to combat the supernatural forces that oppose her. The gothic tone is intensified by strong language and a series of effective individual words, aiming to build up a sense of fear and insecurity for the reader. "Shrouded", "dangerous", "dread" are among other words that are used for effect in this passage. James has introduced us to this passage very well, as we are able to understand how the governess feels. We have a sense that her world is "godless", a world of no social hierarchy. ...read more.

Amelia also contains stories of young women ruined by attractive men, including Mrs. Bennet. Mrs. Bennet's life is somewhat similar to that of the governess'. She too had her own infatuation with a gentleman in Harley Street. Perhaps the book has excited in her an hysterical hallucination? Following on from her read, James also presents us with the ambiguity of time - time playing an important role in determining the clarity and reliability of events. The governess is reluctant to look at her watch; increasing the vagueness of time. The duration of her meeting with Quint can only be five minutes. When she stops reading the book it is "horribly late", but surely not late enough for her to see "The yielding dusk of earliest morning". What explains the hours of missing time? This is strong evidence for the governess' parasomniac state, a state, of half waking, half sleeping. It is likely that her previous encounters have caused her to produce disturbing hallucinations. ...read more.

I feel that the passage needs to be appreciated in terms of its structure. The passage is written in a retrospective narrative, the reliability of which is questionable. There are three main paragraphs. James' familiar pattern is present within this chapter too. The first paragraph sets the scene as it creates terror and prepares the reader for a fearful experience. The second paragraph focuses upon the main event, in this case the appearance of Quint. The final paragraph disperses the tension. The figure of Quint disappears and the pace of the encounter dies. The pace that is created mainly in the second paragraph is crafted by the use of hypo-taxis earlier. Having analysed the passage in detail, one can say that this is a sensationalist piece of writing. There is a general feeling of intimate knowledge mixed with a state of excitement. James' enhanced literary techniques influence the views of the readers in a significant way. Throughout the passage, there is evidence of rich descriptive language and literary devices that intensify the feeling of dread and a sense of ambiguity crucial to James' purposes. BY Adnan Malik ...read more.