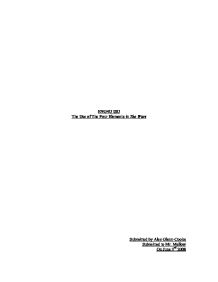 The Use of The Four Elements in The Wars

ENG4U ISU The Use of The Four Elements in The Wars Submitted by Alec Glenn-Cooke Submitted to Mr. Mellow On June 3rd 2008 The Use of The Four Elements in The Wars In Findley's The Wars, the four basic elements (earth, air, water, and fire), exhibit dual meanings. These dual meanings play a large part in making this book a piece of anti-war propaganda. Before the war, the element of earth can be seen as Robert's way of dealing with his beloved sister's death. During the war, the element of earth becomes nothing more than a death trap for Robert, threatening to take his, and others' lives. Again, before the war, water was used as a way for Robert to heal, in a bathtub, but during the war, water, or the seas, violently act against a ship, and almost cause it to sink. When Robert is away from the war, and on his own, he can use fire to help heal mental wounds. However, on the battlefield, fire is used against Robert in the form of a weapon, and nearly kills him in another part of the book. Before the war, air, or sharing air, is a way that Robert is able to connect with his mother, while during the war, it is used as a weapon against him. ...read more.

However, it is also essential to our existence. It cooks our food, boils our water, and heats our homes. There are a few instances in the book where fire is proven to have a positive impact on Robert's life. After Robert was raped, he lost a lot of self-respect. He was ashamed, and felt guilty. He felt as though he had let his beloved Rowena down, and that he was undeserving of her companionship. In order to spare Rowena the shame of being associated with a man who had been raped, he burns her picture. "Everything was there- including the picture of Rowena. Robert burned it in the middle of the floor. This was not an act of anger- but an act of charity."(Findley 195) By burning the picture he was dissociating his sister from him, and therefore doing what he thought would preserve, or restore her honour. The fire that burned the picture helped him deal with what had happened to him, and helped him to remain seeing Rowena as a symbol of perfection. In a way, fire gave him a second chance, or new life. Much like water does at a baptism. Robert also has some fond memories of his parents and his home town that involve fire. ...read more.

He then instructed the rest of them to urinate on their handkerchiefs, and to put them over their face. The alkaline acidity of their urine would protect them from the effects of the gas. This gas was evil, and threatened to end Robert's life. This shows that in the face of war, this element that is so essential to his life, can become poisonous and threaten to kill him. Each of the four elements has played a large part in The Wars. The elements all possess dual, and contradictory meanings: life and death. The way in which these meanings are presented greatly contributes to the negative spin Findley puts on war. Before, or away from war, each element plays a part in the maturation, healing, and growth of Robert as a human being. They each do positive things for the protagonist. During the war, and in combat, the elements seem to have been turned around to work against Robert. Each makes an attempt at ending his life. The purpose of this is not only to show the duality of things, but also to show how war can take good things and make them bad. Such is the case for each of the four elements. This has aided Findley in portraying war as a horrible thing, which ends, or ruins, the lives of many, solving nothing. This piece is very much a counter to wartime propaganda. ...read more.