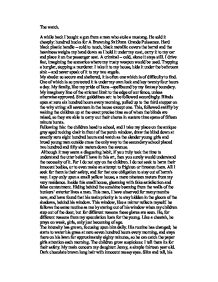 The watch. A while back I bought a gun from a man who stole a mustang. He sold it cheaply: hundred bucks for A Browning 9x19mm Grande Puissance. Hard black plastic handle - cold to touch, black metallic covers the barrel and the heaviness weighs my hand down as I hold it under my coat, carry it to my car and place it on the passenger seat. A criminal - cold, alone it stays still. I drive fast, imagining the scenarios where my trusty weapon would be used. Trapping a burglar, stopping a murderer. I take it to my house, hide it under the bathroom sink - and never speak of it to my two angels. My abode: so secure and sheltered, it is often one which is of difficulty to find. One of which is so protected it is under my own lock and key twenty four hours a day. ...read more.

Hiding behind the sunshine beaming from the walls of the bunkers' exterior lives a man. This man, I have observed for many months now, and have found that his main priority is to stay hidden in the gloom of the shadows, behind his window. This window, like a mirror reflects myself. he follows the same routine as me by staring out of his window when my children step out of the door, but for different reasons these glares are seen. He, for different reasons from my speculation lusts for the young. Like a cheetah, he prays on weak, girls, only just becoming of age. The intensity has grown, focusing upon him daily. His routine has changed; he starts to water his grass at zero seven hundred hours every morning, and stays there on his lawn for approximately eighty minutes, so he can catch the paper girls attention each morning. The children grow suspicious: I tell them its for their safety. ...read more.

I shout. No reply - and again, a clumsy rattle comes from his kitchen as he fondles to find the back door knob. I lift my hand - pointing the shaft directly at his heart, he steps out. 'Whos the-' cut off mid sentence by a bang. Disbelief is the only emotion I feel. I stand next to my neighbour in cold blood shaking - frozen. Minutes pass - a siren bellows down the surrounding avenues. I try to move, but I cant, cement is weighing me down. Four officers around me - surrounded I drop to the floor, weapon down. I smile. A cold room - alone, grey. All that remains is a tape recorder, a table and two chairs - one which I, the hero sit on, and another opposite. The blind is down on the window, third click on the wiry string. And officer walks in. standing tall, staring with intention. He doesn't have a chance to speak before I tell my tale. 'A while back I bought a gun from a man who stole a mustang.' I whispered to the tape recorder. ...read more.