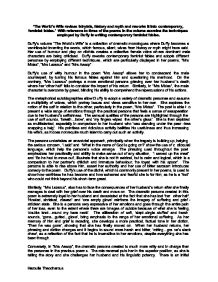 'The World's Wife revises fairytale, history and myth and reworks it into contemporary, feminist fables.' With reference to three of the poems in the volume examine the techniques employed by Duffy in writing contemporary feminist fables. Duffy's volume "The World's Wife" is a collection of dramatic monologues where Duffy becomes a ventriloquist inventing the words, which famous, silent, wives from history or myth might have said. Her use of humour and play on clich�s creates a collective female voice where dominant male characters are being criticised. Duffy reworks contemporary feminist fables and adopts different personae by employing different techniques, which are particularly displayed in her poems, "Mrs Midas", "Mrs Lazarus" and "Mrs Aesop". Duffy's use of witty humour in the poem "Mrs Aesop" allows her to condescend the male counterpart, by turning his famous fables against him and questioning his manhood. On the contrary, "Mrs Lazarus" portrays a more emotional persona grieving over her husband's death, where her 'other half' fails to consider the impact of his return. Similarly, in "Mrs Midas", the male character is overcome by greed, blinding his ability to comprehend the repercussions of his actions. The metaphorical autobiographies allow Duffy to adopt a variety of dramatic personae and assume a multiplicity of voices, which portray issues and views sensitive to her own. ...read more.

Asshole', the use of italics ensure that the fact that she cannot stand him is crystal clear and the word on its own summarises her opinion of him. The irony is that she in a sense has written her own fable, which is more to the point and not as metaphorical and confusing as Mr Aesop's. The dramatic personae in Duffy's poems are not the sole device that make the poems humorous and "help subvert and tease the way we think about myths". The language used in the poem "Mrs Aesop" is sharp, hard and unyielding, where it shows her belittling him physically, 'He was small' and ridiculing his attempt to impress after mocking his physical appearance, 'So he tried to impress'. Duffy uses similes and assonance to reinforce the feelings she wants to create, such as 'slow as marriage' and 'story droned on', where the idea of his stories dragging on due to the long sounds, is created. She singles out words, 'Tedious' and 'Asshole', summarising her opinion and attitude towards him. Aesop is ridiculed and made to look like a boring, cautious, not daring man, 'look...then leap'. The style of the poem is rather humorous, due to the persona's quick, witty remarks undermining her husband. ...read more.

that the story of Midas is viewed purely considering the effect his actions had on him and not his wife who lost her chance of having a child. The decision making of male characters and how this affects their female counterparts is also an aspect that is explored in all three poems. "Mrs Midas" especially represents the collective voice of women, which are trapped in culture of phallocentric principles. "Mrs Lazarus", however explores Duffy's views on capitalism and the fact that the pursuit of wealth is a barrier towards spirituality. In all the poems Duffy shows that females tend to appreciate compassion and relationship more and are actively suppressed by the male dominated society. An example of this is in "Mrs Midas" where many verbs are associated with the husband enforcing the idea of male dominance. Overall Duffy succeeds in undertaking a humorous approach to her poems through the rewriting of history from 'her' perspective to 'his' perspective. However underpinning the comedy there is a serious point being made about the effects and consequences of male behaviour upon females. This volume, succeeds in its addressing of important feminist issues, in a different, humorous and witty manner, which shows Duffy's development of the dramatic personae to show how women have been suppressed or ignored throughout history. Haroulla Theocharous ...read more.