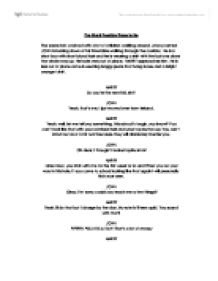 The Worst Possible Place to Be. The scene is in a school with a lot of children walking around. A boy named JOHN is looking down at his timetable walking through the corridor. He is a short boy with short blond hair

The Worst Possible Place to Be The scene is in a school with a lot of children walking around. A boy named JOHN is looking down at his timetable walking through the corridor. He is a short boy with short blond hair and he is wearing a shirt with the buttons done the whole way up. He looks very out of place. HARRY approaches him. He is less out of place as he is wearing baggy jeans that hang loose and a bright orange t shirt. HARRY So you're the new kid, eh? JOHN Yeah, that's me, I just moved over from Ireland. HARRY Yeah, well, let me tell you something, this school's tough, you know? You can't look like that with your combed hair and your top button up. You can't stand out as a total twat because they will absolutely murder you. JOHN Oh dear, I thought I looked quite smart HARRY Listen bruv, you stick with me for the first week or so and I'll set you on your way in this hole. If you come to school looking like that again I will personally kick your arse. JOHN Okay, I'm sorry; could you teach me a few things? HARRY Yeah, Ill do that but I charge by the day. ...read more.

HARRY What are you gonna do? Kill me like your mother was killed. Stick a knife in my stomach? Go on. Do me. John attempts to punch HARRY in the face but HARRY dodges it. HARRY then head butts HARRY and starts kicking him while he's on the ground. HARRY You might act like you're the lad but you're nothing. Absolutely nothing. JOHN is lying in heap on the bathroom floor for a long time after HARRY leaves. His nose is covered in blooded and his hair is a mess. Tears start flowing from his face. He slowly rises to his feet and walks out of the bathroom. He makes a phone call but we don't hear the conversation. JOHN is in school yard the next day badly bruised. He sees SEAN FAGAN and walks over. They are alone away from any person. JOHN You take care of Harry alright? SEAN Let's just say he won't be bothering you again anytime soon. He notices that SEAN has a scarf on. Suddenly we see a flashback. It shows JOHN walking in to his house while two masked people are threatening his mother. They take all her money and stab her. JOHN starts screaming and doesn't dare chase them. He notices one of the boys is wearing a scarf the same as SEAN FAGAN is wearing. ...read more.

In such a situation John says 'That scarf, I-I've seen it before'. This is used here because John is realising something that is very hard for him to take and he can't really believe it. I have tried to develop each character in my script through their use of phrases and words. I have tried to show the viewer what each character does differently and how they react to different things as they progress through the story. The character John is very shy and out of place at the start. He uses such phrases like 'oh dear' and 'I'm sorry'. I intentionally skipped forward a year after John had been crying in the yard just to show the viewers how John had come. He had lost his mother which had made him a lot tougher and he was hanging around with the wrong sort of people. After the skip in time his language is significantly different. He says things like 'Listen mate, I've gotta go for a leak' and 'piss off'. At the start John was very scared of a particular bully but at the end of the story he is not scared at all and he is willing to put up a fight. I developed John to get like this the whole way through the story. The end ...read more.