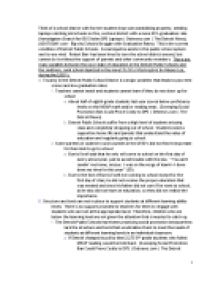 There are many parallels between the poor state of education in the Detroit Public Schools and the southern, rural school depicted in the novel To Kill a Mockingbird by Harper Lee, during the 1930s.

﻿1. Think of a school district with former student drop-outs vandalizing property, stealing laptops catching old schools on fire, a school district with a mere 21% graduation rate (Investigators Search for 650 Stolen DPS Laptops | Detnews.com | The Detroit News), (USATODAY.com - Big-city Schools Struggle with Graduation Rates). This is the current condition of Detroit Public Schools. Social injustice exists in this public school system and is very vivid. Robert Barr has been hired to turn the school district around, but cannot do it without the support of parents and other community members. There are many parallels between the poor state of education in the Detroit Public Schools and the southern, rural school depicted in the novel To Kill a Mockingbird by Harper Lee, during the 1930?s. 1. Truancy in the Detroit Public School District is a major problem that leads to poor test scores and low graduation rates. 1. Teachers cannot teach and students cannot learn if they do not show up for school 1. About half of eighth grade students last year scored below proficiency levels on the MEAP math and/or reading tests. (Sweeping Social Promotion Ban Could Prove Costly to DPS | Detnews.com | The Detroit News). 2. Detroit Public Schools suffer from a high level of students missing class and completely dropping out of school. Students need a supportive home life and parents that understand the value of education and regularly going to school. 1. ...read more.

1. The school in To Kill a Mockingbird could not force the students to learn if their parents did not force them to attend school, and even though the school did not support Scout?s reading ability, her father did. 1. Atticus made a deal with Scout that he would continue to read with her as long as she did not tell Miss Caroline. ??I have a feeling that if you tell Miss Caroline we read every night she?ll get after me, and I wouldn?t want her after me?? (42). 2. Those children who had support from their parents were able to do well in school, but those who didn?t have the same support did not do well and remained illiterate. 1. The current poor state of the Detroit Public Schools has many similar connections to the school portrayed in the novel To Kill a Mockingbird by Harper Lee. Social injustice occurred in the novel as well as today for some children in public schools where they don?t have support of their parents or the tools necessary to learn. For students to be successful, it is crucial for parent evolvement and a strong school network. It is only by implementing new ideas and ways of educating will the injustice issue be overcome. Social injustice in the Detroit Public School System is not Detroit?s problem alone, but rather a greater community issue that needs to be solved. ...read more.

This news organization always provides trustworthy news to the Detroit-Metro area. The author, Karen Bouffard, is part of the Detroit News Lansing Bureau. This article is suitable for anyone who has an interest in the DPS. ________________ "USATODAY.com - Big-city Schools Struggle with Graduation Rates." News, Travel, Weather, Entertainment, Sports, Technology, U.S. & World - USATODAY.com. Web. 20 Mar. 2010. <http://www.usatoday.com/news/education/2006-06-20-dropout-rates_x.htm>. This article identifies the 50 largest school districts in the United States, and their graduation rates. Detroit is the 11th largest school district on the list. It has a graduation rate of 21.7%. This is the lowest graduation rate on the list of the largest 50 school districts in America. The study examined the percentage of students that graduate and found that around 70% of freshmen make it through their senior year successfully in four years. The article quotes another researcher who states that the graduation rate is closer to 82% of all students. This article is useful towards studying the Detroit Public Schools because it provides specific details of the problems that the district faces. The source of this article is USA TODAY. USA TODAY is very reliable because it is known for covering exceptional news stories around the country. The author, Greg Toppo, has been working for USA TODAY for many years and has won awards for his excellence in the field. The article is appropriate for all ages and should be seen by anyone who finds interest in learning about the problems in the Detroit Public Schools. Social Injustice in Detroit Public Schools ...read more.