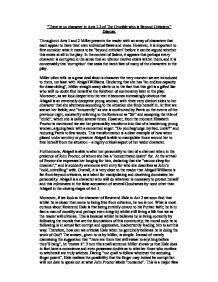 There is no character in Acts 1-2 of 'The Crucible' who is Beyond Criticism. Discuss.

"There is no character in Acts 1-2 of The Crucible who is Beyond Criticism." Discuss. Throughout Acts 1 and 2 Miller presents the reader with an array of characters that each appear to have their own individual flaws and vices. However, it is important to first consider what it means to be "beyond criticism" before it can be argued whether this exists at all in the play. In the context of Salem, it appears that perhaps every character is corrupted in the sense that an ulterior motive exists within them, and it is conceivably this 'corruption' that seals the harsh fate of many of the characters in the play. Miller often tells us a great deal about a character the very moment we are introduced to them, not least with Abigail Williams. Declaring that she has "an endless capacity for dissembling", Miller straight away alerts us to the fact that this girl is a gifted liar who will no doubt find herself at the forefront of controversy later in the play. Moreover, as we look deeper into the text it becomes increasingly obvious that Abigail is an extremely deceptive young woman, with three very distinct sides to her character that she alternates according to the situation she finds herself in. At first we see act her feeble, and "innocently" as she is confronted by Parris on the events of the previous night, constantly referring to the Reverend as "Sir" and accepting the title of "child", which she is called several times. ...read more.

In actual fact he could not turn his visit into more of an interrogation. "I have no.../suspicion", he proclaims, and yet on pages 53-55 he is quite clearly hunting for evidence of witchcraft, asking abrupt and frankly insulting questions such as "How comes it only two (children) are baptized?" and "Do you know your commandments?" This is further confirmation that Hale has much to be criticised for. Reverend Parris is also left wide open to criticism in Act 1 where we witness an outburst of the greed and selfishness that consumes him. With his daughter "lying on the bed, inert" and the suggestion from the town doctor that witchcraft may be involved, he simply dwells on the fact that he "(has) many enemies" that are "sworn to drive (him) from (his) pulpit", revealing his egotism. Rather than consider what this means for his daughter, Parris proclaims: "Now my ministry's at stake, my ministry and perhaps your cousin's life". This is an extremely powerful piece of language as Miller has constructed a sentence with a deliberate break to represent the clause between the most important thing in Parris's life and all that which comes after it. We see this greed arise again on pages 23 and 24 where Parris proclaims he is paid "little enough without I spend six pound on firewood" and where we are told he was the "first minister ever" to "demand the deed to this house". ...read more.

To give an example, in Act 1 Mrs. Putnam believes that her daughter Ruth is possessed because "she cannot eat", whilst Rebecca lightly suggests "perhaps she is not hungered yet". Moreover, once Mr. Putnam draws to the conclusion that Betty must be possessed, Rebecca simply says "there is a hard sickness here", undermining this belief and professing that Betty's condition is a physical ailment rather than a diabolic spirit possessing her. Overall, Miller perfectly illustrates Rebecca's freedom from criticism in making Hale say "If Rebecca Nurse be tainted, then nothing's left to stop the whole green world from burning." To conclude, within the first two acts we see several characters each with their own unique flaws and critical attributes. The hysteria that evolves in these acts develops from a combination of Abigail's talent for deception, Parris' selfishness, the ignorance of Hale, and the lust lurking within Proctor. Miller has crafted a complex society in which it is very difficult, if not impossible, to survive without having attributes that the reader can consequently criticise and perhaps this is why the reader can locate such flaws so easily. However, it is very difficult for the reader to criticise Rebecca Nurse as she is both rational and socially responsible in her efforts to calm other characters' fears, perhaps, at this stage, making her beyond criticism. ...read more.