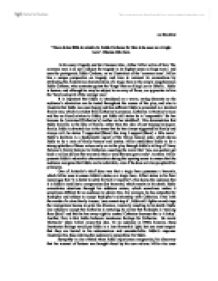 There is too little to admire in Eddie Carbone for him to be seen as a tragic hero. Discuss this view.

Joe Stanford 'There is too little to admire in Eddie Carbone for him to be seen as a tragic hero'. Discuss this view. In his essay Tragedy and the Common Man, Arthur Miller writes of how 'the common man is as apt a subject for tragedy in its highest sense as kings were', and uses the protagonist, Eddie Carbone, an as illustration of the 'common man'. Miller has a unique perspective on tragedy, and tries to reinvent its conventions by attributing the Aristotelian characteristics of a tragic hero to the simple longshoreman Eddie Carbone, who contrasts against the 'kings' that are King Lear or Othello. Eddie is human, and although he may be subject to an array of flaws, we appreciate in him the 'heart and spirit of the average man'. It is important that Eddie is introduced as a warm, caring character so the audience's admiration can be tested throughout the course of the play, and also to illustrate that Eddie was once happy and has suffered. Eddie is presented as a devoted family man, which is evident from Catherine's presence. Catherine is Beatrice's niece and has no blood relation to Eddie, yet Eddie still states he is 'responsible' for her because he 'promised [Catherine's] mother on her deathbed'. ...read more.

This links with another trait of a classical Greek tragedy which is that the character's fate must be greater than deserved. In Miller's essay, he writes that the protagonist is merely 'attempting to gain his "rightful" position in his society". Perhaps this is evident when Eddie is shouting 'I want my name' for it illustrates Eddie's desire for the respect and reputation the title possessed in the neighbourhood of Red Hook. Eddie just wanted an 'unchangeable environment' and did not initially intend to create any distress; originally, he describes taking the immigrants as 'an honour'. Eddie's reaction illustrates his dedication to family values which strengthens the idea that his fate was far greater than deserved. Eddie conforms to Aristotle's idea of peripeteia, which is the protagonist's reversal of fortune. Initially, the apartment is presented as 'homely' but towards the climax it is a place of isolation for Eddie, where he is 'rocking back and forth' alone. This is because Eddie's relationships crumble. In the opening scene, Eddie's relationship with Beatrice seems healthy; he cares about her and worries that she has 'got too big a heart'. Eddie's obsession with Catherine, however, affects Beatrice, which engenders some conflict between them; Beatrice shouts more frequently about Eddie's inability to 'leave her alone'. ...read more.

He states how he thinks he will 'love him more than all [his] sensible clients' during his epilogue, heightening his status to the audience. This is Miller's way of attributing the classic Aristotelian characteristic of nobility to Eddie, which remains at the very core of his actions. More sympathy is created when the audience recognise this at the climax when he cries 'Then why'; questioning why his selflessness resulted in his death. In conclusion, Eddie may not be 'purely good, but himself purely' expressing that albeit subject to an array of flaws, Eddie is human and a man whose actions are rooted to his morals and values, which are by far the most dominating reasons for how one can see him as a 'tragic hero'. Eddie remains the unconventional protagonist of Arthur Miller, in that Eddie possesses the classical Aristotelian characteristics of a tragic hero but he is not someone of royalty or great power; he is a 'common man' who has nothing but his family and his morals. Some may view Eddie as a man who fails to 'settle for half', but what marks his tale as special; what places him among the admirable tragic heroes such as Othello or King Lear, is his being 'wholly known'. ...read more.