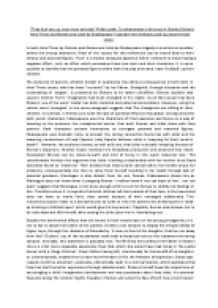 They f*** you up, your mum and dad Philip Larkin. To what extent is this true in Charles Dickens Hard Times and Romeo and Juliet by Shakespeare? Consider the methods used to present these views.

﻿?They fuck you up, your mum and dad? Philip Larkin. To what extent is this true in Charles Dickens? Hard Times and Romeo and Juliet by Shakespeare? Consider the methods used to present these views. In both Hard Times by Dickens and Romeo and Juliet by Shakespeare tragedy in one form or another strikes the young characters. Most of the causes for this misfortune can be traced back to their infancy and parental figures. ?Fuck? is a mostly colloquial adjective which I interpret to mean having a negative effect, such an effect which permeates these two texts and their characters. It is quite possible to identify that the parental figures within both the play and novel, have ?fuck(ed)? up their children. The existence of parents, whether distant or oppressive has obvious consequences in both texts. In Hard Times Louisa, who has been ?nurtured? by her father, Gradgrind, through education and the undertaking of ?ologies?, is presented by Dickens to be rather unfulfilled. Dickens explains that Louisa?s brother Tom?s ?imagination had been strangled in his cradle?, much like Louisa?s has been. Dickens? use of the word ?cradle? has both maternal and paternal connotations. However, using the violent word ?strangled? in the same paragraph suggests that The Gradgrinds are stifling of their children. ...read more.

Ultimately leaving him punishable for his crimes and essentially ruining his life. Equivalently in Romeo and Juliet the stubbornness of the two feuding families results in the deaths of the two protagonists. Shakespeare identifies the ?ancient grudge? which exists between Romeo and Juliet?s households. The word ancient reflects the long existence of this ?grudge? and shows how deeply rooted the conflict is. This meant that Romeo and Juliet were not able to announce their love for one another. Had this grudge not existed and the parents of Romeo and Juliet not continued with the tradition, their love wouldn?t have been so complicated and Juliet would have been able to marry Romeo openly without it ending in tragedy. Given that marriage to Romeo would secure Juliet the same societal position as if she had married Paris, ?alike in dignity?. Therefore the ?parents? strife? resulted in the untimely deaths of the two young characters. Dickens contrasts Louisa and Sissy in Hard Times, which reflects the difference in parenting styles and subsequently the impacts of bad parenting on Louisa. Sissy is characterised as a very emotive and imaginative character whereas Louisa is presented to pertain many aspects of stoicism, since she was taught ?never to wonder? by her father. ...read more.

her declining happiness ?coming down.? Then the next two chapters are so called to correspond with Louisa?s disposition, ?lower and lower? and ?down.? This suggests that Tom?s difficulties also arose from Gradgrind?s parenting, and he is not to blame for his monetary problems. Shakespeare characterises Juliet differently after her father orders her to marry Paris, ?disobedient wretch.? Juliet in previous acts was portrayed as a very respectful young lady, Shakespeare uses a lot of mannerisms in her speech to reflect this, ?Madam, I am here.? The use of Madam shows that Juliet has respect for her mother, which is how children were expected to behave in Shakespearean times. However after Juliet is ordered to marry against her will she quickly matures and becomes more cynical. Juliet says to her Nurse ?thou hast comforted me marvellous much? the alliteration in this sentence adds a tone of sarcasm to Juliet?s speech. The sarcasm displayed as a result of Juliet?s father?s insensitivity, shows that parenting has had a negative effect on Juliet, transforming her from a dignified innocent child into a sarcastic cynic. Finally, I believe that Philip Larkin?s opinion on parenting is beautifully mirrored in both these texts. It is indisputable that the issues each young character faces have been catalysed if not spawned from the clearly influential parental figures. 2075 ...read more.