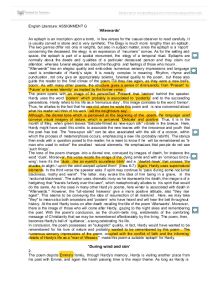 Thomas Hardy - analysis of three poems. Afterwards, During wind and rain and After a journey.

English Literature: ASSIGNMENT G 'Afterwards' An epitaph is an inscription upon a tomb, in few verses for the casual observer to read carefully. It is usually carved in stone and is very synthetic. The Elegy is much more lengthy than an epitaph. The two genres differ not only in lengths, but also in subject matter, since the epitaph is a 'report' concerning the deceased, the elegy is an expression of 'mourners'' sorrow. As for the setting and space, the epitaph is part of a spatial monument, the elegy of a temporal ritual. Epitaphs are normally about the deeds and qualities of a particular deceased person and they claim our attention; whereas funeral elegies are about the thoughts and feelings of those who mourn. "Afterwards" has an elegiac quality and embodies numerous sensory impressions and language used is emblematic of Hardy's style. It is mostly complex in meaning. Rhythm, rhyme and punctuation, not only give an appropriately solemn, funereal quality to the poem, but these also guide the reader to the final climax of the poem 'Till they rise again, as they were a new bell's boom'. As with many other poems, the structure gives a sense of diminuendo; from 'Present' to 'Future' or to even 'eternity' as implied by the former verse. ...read more.

In the second stanza, Emma's family is remembered during their ordinary activities, when 'elders and juniors', work in the garden to make "the pathways neat/And the gardens gay.' Through these lines we get a glimpse of Emma's family lifestyle. They used to live according to rural customs, in strict contact with nature. This relationship, is a very Victorian theme. In fact, Victorian poets used to find peace in their escape into nature, which brings them comfort and find in 'hearthside ease'. Moreover, the aim of his representation of village life is thus done partly to metaphorically argue about those local values at the point of their vanishing, thus Hardy's recording of family traditions, folk-tales, popular songs and dances, and the vanishing vocabulary of the Wessex dialect; and his registering the impact of other changes of rural life. Nonetheless, "the white storm birds wing across the sky;" announce the coming of a storm. Here, the title is recalled. Later, while they are "blithely breakfasting all" the wind removes the dead rose from the wall. The alliteration "rotten rose is ript," are three simple alliterated words but convey a complex image. We get the impression of the wind's strength and the fragility of the 'rotten' flowers, the latter are probably a metaphor for old age when people a more fragile, just like the 'tremulous leaves' in 'Afterwards'. ...read more.

In addition, the 'up, down' convey an idea of the poet's loss of direction , who then settles down, as emotionally more deep - 'lonely, lost'. Hardy emotions are like 'Unseen waters', metaphorically symbolize life and the subconscious, which he confronts in this poem. Hardy' s use of language is very apt, he describes Emma as a 'rose flush', which recalls line 23, 'all aglow'. The image of her is intensely physical, perhaps implicitly sexual. The reader gets strongly engaged in Hardy's memory. The sounds of wind and nature as a whole, coupled by the ghostly presence of these 'gray eyes' and the direct speech lead throughout his journey until the final lines when surprisingly the ghost vanishes from him. As if awaken by the 'whitens hazily', the reader is now prepared to find a happy ending. Hardy's ending seem positive and assuring. At the end of the poem, there is a harsh rhyme ('lours/flowers') and a declaration which, it seems to me, can only be read ironically and hopelessly against the background of loss 'I am just the same as when/Our days were a joy, and our paths through flowers' nearly as if stating 'but you are not'. The 'Trust me ... though Life lours' introducing this declaration might imply a recognition that trust may be betrayed. ?? ?? ?? ?? ...read more.

The writer is aware that when discussing poetry, it is very important to consider the use of rhyme, rhythm and imagery and how these help to create meaning. However, this essay demonstrates how great care must be taken in the discussion of metaphor in particular. For example,'dusk' may operate as a metaphor of death, but sometimes it just means 'dusk'.
The essay would benefit from a stronger overall structure, with an appropriate introduction and a conclusion which sums up themes and techniques.