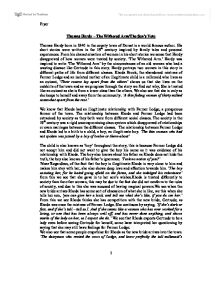 Thomas Hardy - The Withered Arm/The Son's Veto Thomas Hardy born in 1840 in the county town of Dorset is a world famous author. His short stories were written in the 19th century inspired by family tales and personal experiences. From his characterisation of women in his short stories we sense that Hardy disapproved of how women were treated by society. 'The Withered Arm.' Hardy was inspired to write 'The Withered Arm' by the circumstances of an old woman who had a wasting disease like Gertrude in this story. Hardy portrays two women in this story in different paths of life from different classes. Rhoda Brook, the abandoned mistress of Farmer Lodge and an isolated mother of an illegitimate child is a milkmaid who lives as an outcast, 'Their course lay apart from the others' shows us that she lives on the outskirts of the town and as we progress through the story we find out why, She is treated like an outcast as she is from a lower class than the others. We also see that she is only as she keeps to herself and away from the community. 'A thin fading woman of thirty milked somewhat apart from the rest.' We know that Rhoda had an illegitimate relationship with Farmer Lodge, a prosperous farmer of the town. The relationship between Rhoda and Farmer Lodge had been ostracised by society as they both were from different social classes. The society in the 19th century was a rigid uncompromising class system which disapproved of relationships or even marriages between the different classes. The relationship between Farmer Lodge and Rhoda led to a birth to a child, a boy, an illegitimate boy. 'The thin woman who had not spoken was joined by a boy of twelve or there-about' The child is also known as 'boy' throughout the story, this is because Farmer Lodge did not accept him and did not want to give the boy his name as it was evidence of his relationship with Rhoda. ...read more.

We see that Gertrude became insecure towards the end of the story which caused her to break down. The laws that society had enforced on Gertrude also caused her to break as she could not obey them. Gertrude is weak compared to Rhoda who is a survivor. Hardy shows that Rhoda, who did not conform to the rules, survived the brutality of society in the 19th century; however, it was Gertrude who could not tolerate the brutality of society which resulted in her death. Farmer Lodge, a prosperous farmer of the town. An ignorant arrogant coward for many reasons. Firstly, his illicit relationship with Rhoda Brook was frowned upon by society due to the difference between social class. He is known to be arrogant as he does not give the boy his name, this may be due to the pressure by society. When Farmer Lodge brings home his new bride, he was so proud and impressed that he got a young beautiful wife, and the first thing he done was show her off to the town. For Farmer Lodge, She was the ideal 'trophy' wife as she elevated his status and image. 'O yes, you must expect to be stared at just at first, my pretty Gertrude.' From this we see that Farmer Lodge is in a way certain that Gertrude would get stared at by the town. We see after Farmer Lodge finds out about Gertrude's withered arm, their relationship begins to fall apart especially as Gertrude cannot bear a child and Farmer Lodge is desperate for an heir and brings forth the subject of adopting his son. We see that Farmer Lodge is selfish as when he needs his son he is willing to accept him whereas usually he takes no notice of the boy. 'I once thought of adopting a boy; but he is too old now. And he is gone away I don't know where.' ...read more.

However, some say he ran away from society as he was ashamed of Sophy. We see that he made many sacrifices for Sophy, firstly by running away from society but he was in some way scared of what society had to say. Once he married he tried to elevate Sophy to his level as he knew it was good for the both of them, 'and her husband had taken much trouble with her education.' He is caring as he wanted her to fit in and he arranges everything before he dies as he thinks it is good for her. 'Mr Twycott had never rallied, and now lay in a well-packed cemetery to the south of the great city, where, if all the dead it contained had stood erect and alive, not one would have known him or recognised his name.' From this we see he is isolated as he is buried amongst people who he did not know and who took no notice of him. This shows love as well as sacrifice for Sophy. He is a typical Victorian man as he knew women were irrational and when he died he left his possessions with his trustees. Society was a rigid uncompromising class system that broke up relationships. In both The Withered Arm and The Son's Veto relationships were either ended of forced to be pushed out of town. Rhoda and Farmer Lodge's relationship ended as they knew it would be ostracised by society. However, Sophy and Mr Twycott ran away from society as they knew what the consequences will be as they married. From this we see the extent of control that society had over people and this control could never be overcome. The reason these stories were written was because Hardy was concerned of the way women were treated and some say his disapproval was shown in The Withered Arm and The Son's Veto. ?? ?? ?? ?? Fryer 2 Fryer 1 ...read more.