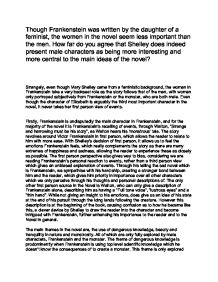 Though Frankenstein was written by the daughter of a feminist, the women in the novel seem less important than the men.

Though Frankenstein was written by the daughter of a feminist, the women in the novel seem less important than the men. How far do you agree that Shelley does indeed present male characters as being more interesting and more central to the main ideas of the novel? Strangely, even though Mary Shelley came from a feministic background, the women in Frankenstein take a very backseat role as the story follows that of the men, with women only portrayed subjectively from Frankenstein or the monster, who are both male. Even though the character of Elizabeth is arguably the third most important character in the novel, it never takes her first person view of events. Firstly, Frankenstein is undisputedly the main character in Frankenstein, and for the majority of the novel it is Frankenstein's recalling of events, through Walton, "Strange and harrowing must be his story", as Walton hears his 'monstrous' tale. ...read more.

All of which are only fully explored by male characters, Frankenstein and the monster. The theme of dangerous knowledge is prodominently when Frankenstein is using top level scientific knowledge which he doesn't know the consequences of to create a monster. This theme is only explored through Victor and women have no significance in it, giving a indication that men take a more important role in getting across the themes in the novel. Beauty in nature is often used by both Frankenstein and his monster as almost a break from the carnage that plagues the story, and offers time for reflection and rejoicing in a very romanticism influenced view of nature with it being described as, "all around calm" and "supreme and magnificent" as the turmoil that entangles most characters in the novel, however it is predominatly the story of struggle between Frankensetin and the monster, and even though Elizabeth and Justine take up a significant portion in the theme, they aren't the main focus, rather the feelings of Frankenstein and the monster are, and the women are almost 'helpless' to all tragic events towards them. ...read more.

dead and his aggressive and detestation towards the monster, which yet again puts forth a interesting question, who is the greater monster, Frankenstein or the monster he created? So to conclude, from the exploration in the essay it is clear to say that woman are portrayed very passively, for the most part as emotional connection tools and are rendered helpless against all monstrosities. However on the other hand, the male characters are much more closely woven with the story with the two main characters both Frankenstein and the monster both having a deep emotional connection with the reader with first person accounts of situations. In terms of the main ideas/themes of the novel, men are the only ones to convey these with emphasis, and women only used as dramatic devices. So as a result the women in Frankenstein are less important than the men as their significance is very small compared to the men who are very central to the plot, and stay constantly in focus throughout the novel. ...read more.