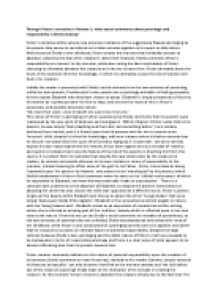 Through Victors narrative in Volume 1, what social comments about parentage and responsibility is Shelley making?

﻿Through Victor?s narrative in Volume 1, what social comments about parentage and responsibility is Shelly making? Victor?s narrative within volume one provides indication of the suggestively flawed upbringing by his parents that serves to contribute to his later extreme egotism in his quest to defy nature. Reminiscent of Shelly?s own childhood, Victor creates the monster that he fatally chooses to abandon, seized by the fear of his creation?s ?abhorrent? features. Shelly comments Victor?s responsibility as a ?parent? to the monster, while also noting the later implications of Victor choosing to ultimately abandon the creature as it returns to haunt him. Victor ultimately bears the brunt of his excessive thirst for knowledge, in which he ultimately usurps the role of women and God in his creation. Initially the reader is presented with Shelly?s social comments on the two extremes of parenting; unlike her own parents, Frankenstein?s own parents are surprisingly amicable in feeling sympathy for the orphan Elizabeth who they later choose to adopt. Elizabeth is simply presented to Victor by his mother as ?a pretty present? for him to keep, and we see the result of this in Victor?s possessive, and possibly obsessive nature: ?My more than sister, since till death she was to be mine only?. ...read more.

parallels to the Gothic genre; Victor, sitting in his dark, dingy laboratory of ?filthy creation? succumbs to the horror of his creation, despite the supposed beauty of features while constructing the creature. It is therefore ironic that despite his parents? own benevolence and Victor?s virtually ?perfect? upbringing that he chooses to abandon his own creation. His motives for creating the monster are also questionable; the over-protectiveness of his father is revealed in its full extent when he comments on how precautions had been made that his mind ?should be impressed with no supernatural horrors?, yet only leading to a much greater thirst for knowledge and possibly power. Victor comments that ?a new species? would therefore ?bless (him) as its creator and source?. Frankenstein?s intentions on creating the new being shows a lapse in judgement, as he earnestly believes that his creation would lead to ?many happy and excellent natures? who would express ?gratitude? to him, similarly to his own picturesque childhood where he expressed the same gratitude for his parents, who would irresponsibly return to him a much further drive for knowledge and contribute to his belief of his own indestructability. Lack of adequate parental judgement is clearly part of Shelly?s commentary within the text, and Victor?s own narration in the ?conception? of the monster serves to prove this: Victor believes that the monster had ...read more.

Thus Shelly comments on the possibility of events to come should man hold the key to the secrets of life, and the ultimate consequences of humanity choosing to do so. We can see Victor as challenging the traditional role of ?scientists?, instead of simply observing and proving theories, he aims to challenge them and become a creationist for his own intentions, foregoing responsibility for his actions. Victor?s narrative within Volume One serves as a parallel to Shelly?s own dysfunctional family, where Frankenstein is ironically brought up with much benevolence, yet with a constant dark undertone and foreshadowing nature. Victor can be seen as attempting to avoid responsibility, in which he implicates his father for not deterring him enough from his scientific voyage as being the reasons for the later deaths and destruction that ensues, while Shelly also comments on the question of the extent of parental responsibility: Victor feels immense guilt over his creation, yet possibly for the wrong reasons; he shows no remorse in abandoning the near helpless creature yet suffers intensely as he witnesses the deaths of the closest people to him. Ultimately, Shelly raises the question of the purpose of mankind, and whether it is justifiable for man to hold the keys to the secrets of nature, as well as the responsibility of parents for their children and their actions. ...read more.