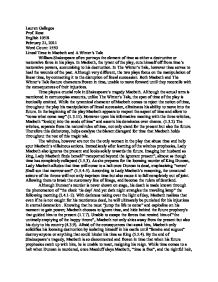 Time in Macbeth and A Winters tale. While on the surface Macbeth and The Winters Tale appear to have nothing in common, the theme of time exposes their surprising similarities.

Lauren Gallegos Prof. Rose English 105B February 21, 2011 Word Count: 1550 Lineal Time in Macbeth and A Winter's Tale William Shakespeare often portrays the element of time as either a destructive or restorative force in his plays. In Macbeth, the tyrant of the play, cuts himself off from time's restorative powers, succumbing to his destruction. In The Winter's Tale, however time serves to heal the wounds of the past. Although very different, the two plays focus on the manipulation of linear time, by connecting it to the disruption of lineal succession. Both Macbeth and The Winter's Tale feature characters frozen in time, unable to move forward until they reconcile with the consequences of their injustices. Time plays a crucial role in Shakespeare's tragedy Macbeth. Although the actual term is mentioned in cornucopias amounts, unlike The Winter's Tale, the span of time of the play is ironically omitted. While the tyrannical character of Macbeth comes to reject the notion of time, throughout the play his manipulation of lineal succession, eliminates his ability to move into the future. In the beginning of the play Macbeth appears to respect the aspect of time and allow to "come what come may" (1.3.11). However upon his informative meeting with the three witches, Macbeth "look[s] into the seeds of time" and asserts his dominates over chance. ...read more.

While time comes to a halt when Duncan is murdered, once Macduff slays Macbeth, "time is free", and the rightful heir, Malcolm, restores the lineal succession broken by Macbeth. Macbeth's inability to recognize the power of time, and therefore the consequences of his sins, help solidify his downfall as a tyrannical ruler. While Shakespeare's The Winter's Tale is considered a comedy. Similar to his tragedy Macbeth, The Winter's Tale features an intransigent ruler imprisoned by time as punishment for his disruption of lineal succession. Told over a sixteen year span, the tale of King Leontes, unlike Macbeth is one obsessed with the restorative power of time. However in the beginning of the play it appears as though though Leontes will meet a tragic end similar to Macbeth's. Grief stricken over the destruction of his family, Leontes finds himself incapable of moving forward with his life until he is able to restore his broken linage. After jealously accusing his wife of "sully[ing] the purity and whiteness of his sheets", not only does she die from misery, but his son, Mammilius, and only heir, dies as well (1.2.34). Mammilius, like the witches in Macbeth, represents a dichotomy in time by symbolizing the future and the past of his kingdom. The next lineal successor to the throne, Leontes views Mammilius as the future of Sicily. ...read more.

While on the surface Macbeth and The Winter's Tale appear to have nothing in common, the theme of time exposes their surprising similarities. Both surrounding the lives of kings frozen in time. Macbeth and Leontes each interfere with the lineal succession of their kingdoms stopping the linear succession of time. However, not until the lineal succession is restored in both plays is time allowed to be free. Although time connects Shakespeare's two late plays, there is no denying the overwhelming differences between the two. While The Winter's Tale features a tragic beginning, the final scenes stick to the classic comedic ending, with a final image of prosperity for the future. Macbeth, on the other hand is a model tragedy featuring a tragic hero racing against time and ultimately his death. Both Macbeth and Leontes in their plays lose their wives due to their intransigent behavior, but only Leontes who accepts his sins, is able to regain his wife in the end. Although time plays a major role throughout Macbeth and The Winter's Tale, time actually takes the form of a character in The Winter's Tale, while Macbeth is haunted by prophesies that catalyzes his actions throughout the play. The most striking difference concerning time in the two play is how each character reacts to the notion. While Macbeth comes to ignore time and its power all together. Leontes embraces his punishment for cutting of his lineage, and looks to time as having the ability to restore all of his misfortunes. ...read more.