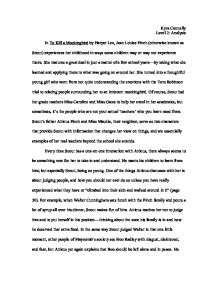 To Kill a Mockingbird: Scout's Teachers

Kyra Connelly Level 2: Analysis In To Kill a Mockingbird by Harper Lee, Jean Louise Finch (otherwise known as Scout) experiences her childhood in ways some children may or may not experience theirs. She matures a great deal in just a matter of a few school years-by taking what she learned and applying them to what was going on around her. She turned into a thoughtful young girl who went from not quite understanding the emotions with the Tom Robinson trial to relating people surrounding her to an innocent mockingbird. Of course, Scout had her grade teachers Miss Caroline and Miss Gates to help her excel in her academics, but sometimes, it's the people who are not your actual 'teachers' who you learn most from. Scout's father Atticus Finch and Miss Maudie, their neighbor, serve as two characters that provide Scout with information that changes her view on things, and are essentially examples of her real teachers beyond the school she attends. Every time Scout has a one-on-one interaction with Atticus, there always seems to be something new for her to take in and understand. ...read more.

Another important thing that Atticus portrays in his actions as an example for Scout to follow is about courage and standing up for what you think is right. Atticus could have easily said no to defending Tom Robinson's case, but he knew the right thing to do would be to give it all he could to defend Tom in the best way possible. He taught Scout to continue pushing yourself and to work hard to achieve the things that are important to you. Atticus also teaches Scout (and Jem too, for that matter) about respecting their elders and to take time to be understanding with what they are going through. Mrs. Dubose is a perfect example, because although she was extremely rude to Atticus and seemingly mean, she was a truly inspiring "lady" who gave it all she could to try to get off her drug addiction before she died. Not the best story, but that was also something that taught Scout about real courage when Atticus explained it better. ...read more.

Miss Maudie acted as a teacher to Scout outside of her classes because she taught her new things she might have never learned at school, but also extremely important pieces of advice and lessons. The most thoughtful thing Miss Maudie ever taught Scout was about a bird-a mockingbird. "Mockingbirds don't do one thing but make music for us to enjoy. The don't eat up people's gardens, don't nest in corncribs, the don't do one thing but sing their hearts out for us. That's why it's a sin to kill a mockingbird." (page 90) And it is this lesson, this quote, in which Scout will remember forever and prove her maturity at the end of the story. Anyone can teach, but a real teacher is one who can take morals and values and lessons and is able to reach out to another person and help them learn to be better. Scout Finch has many teachers throughout To Kill a Mockingbird, in and out of school. Atticus Finch, her father, and Miss Maudie, a friend, were just two of Scout's select role models who gave her instruction throughout the story and -even if she did not know it-became teachers she will always have. ...read more.