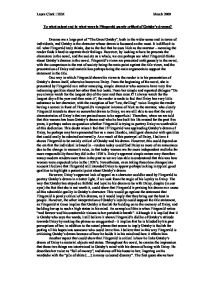 To what extent and in what ways is Fitzgerald purely critical of Gatsby?

To what extent and in what ways is Fitzgerald purely critical of Gatsby's dreams? Dreams are a large part of "The Great Gatsby", both in the wider sense and in terms of individuals, and Gatsby is the character whose dream is focussed on the most. It is difficult to tell what Fitzgerald truly thinks, due to the fact that he uses Nick as the narrator - meaning the reader finds it hard to separate their feelings. However, by looking at how he presents the characters in the novel, and the society as a whole, we can perhaps see what Fitzgerald thinks about Gatsby's dreams in the novel. Fitzgerald's views are presented ambiguously in the novel, with the comparison to the rest of society being the main point against the title views, and the presentation of Daisy and materialism perhaps being the main arguments to support the statement in the title. One way in which Fitzgerald shows his views to the reader is in his presentation of Gatsby's dream itself, otherwise known as Daisy. From the beginning of the novel, she is presented by Fitzgerald as a rather annoying, simple character who seems to have very few redeeming qualities about her other than her looks. From her simple and repeated dialogue "Do you always watch for the longest day of the year and then miss it? ...read more.

It also appears to be critical as these links would imply that Gatsby has spent all this time chasing after a somewhat empty dream, as he has money and a certain amount of status in his community. It could also give the impression that Fitzgerald feels that Gatsby may never feel that his dream has been completely fulfilled if it is status that he wishes to have. This point could be linked to Fitzgerald's overall views about dreams in America at that point, as he could be trying to say that these people who think that material objects and status will make them happy (perhaps those people who were or are enticed by a vision of the American Dream) will never be truly happy as there will always be somebody richer, more popular or at a higher status than themselves. If the reader links this point to Fitzgerald's feelings about Gatsby's dream, it would indicate that he is critical of it for the most part. A second quote that could show that Fitzgerald is critical of this intense build-up of dreams is on page 93; "No amount of fire or freshness can challenge what a man can store up in his ghostly heart". I believe that this quote is Fitzgerald telling the reader that what is there in reality can never match our dreams - in Gatsby's case, that the real life Daisy can never live up to the ...read more.

These quotes from the book could possibly be taken as negative, as it could perhaps be seen as somewhat pathetic that Gatsby relies on somebody else (and, as mentioned earlier, particularly Daisy) to complete his happiness, meaning that Fitzgerald would perhaps view Gatsby as foolish. However, I believe that the way Fitzgerald has tried to make Gatsby's dreams and feelings seem more natural are a direct pointer to how dreaming is a part of human nature, and as such, he is not criticising Gatsby's dream at this point. Due to Fitzgerald's seeming disregard for Daisy in the novel, I believe that he is critical of Gatsby's dream to be with her. However, I believe the other aspects of his presentation linking to dreams in a wider context prevent this view from seeming as if he is purely critical of it - the way that he suggests dreams are important to human nature and separate Gatsby from the crowd imply that Fitzgerald finds dreaming admirable, to an extent. For him to be purely critical I believe that he would have to feel purely critical of dreaming in general, which I believe not to be the case. Therefore, I believe the conclusion that Fitzgerald is critical to an extent is far more feasible and takes into account the more positive aspects of dreaming that he seems to incorporate and believe in. ?? ?? ?? ?? Laura Clark 12EM March 2009 ...read more.