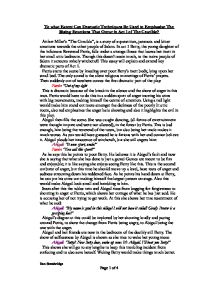 To what Extent Can Dramatic Techniques Be Used to Emphasize The Rising Emotions That Occur in Act 1 of The Crucible?

To what Extent Can Dramatic Techniques Be Used to Emphasize The Rising Emotions That Occur in Act 1 of The Crucible? Arthur Miller's "The Crucible", is a story of superstition, paranoia and bitter emotions towards the other people of Salem. In act 1 Betty, the young daughter of the infamous Reverend Parris, falls under a strange illness that leaves her inert in her small attic bedroom. Though this doesn't seem much, to the naive people of Salem it screams unholy witchcraft! This essay will explain and extend key dramatic parts of Act 1. Parris starts the scene by kneeling over poor Betty's inert body, lying upon her small bed. The only sound is the silent religious mutterings of Parris' prayers. Then suddenly out of nowhere comes the first dramatic part of the play: Parris: "Out of my sight This is dramatic because of the break in the silence and the show of anger in this man. Parris would have to do this in a sudden spurt of anger moving his arms with big movements, making himself the centre of attention. Using a red light would make him stand out more amongst the darkness of the poorly lit attic room, also red emphasizes the anger he is showing and also it highlights the evil in this play. ...read more.

John Procter, a large, self confident farmer from just outside Salem, is not of such a religious nature as Parris. However he still has his firm beliefs and stands strong beside God. His wife hired Abigail to work in his house, but Abigail was fired when Goody Procter found out Abigail and John were having an affair. He then turned his back on Abigail even though she was still madly in love with him and when he reveals this to her she reacts badly: Abigail: "You loved me, John Procter, and whatever sin it is, you love me yet." She says this through tears of hate and desperate disbelief. I would imagine she would grab him by the shirt and shout this at him like an order, as if him loving her is written in the law, almost crouching as she goes weak at the knees. John realizing that he is hurting the poor, young Abigail, would turn away from her unable to look into her tear filled eyes. Upon hearing this, Betty wakes. The soft sound of a joyful psalm drifting lazily up through the floor of Betty's attic room as John and Abigail run to her side. Betty wails and cries as loud as she can; placing her hands over her ears as her father Parris enters. ...read more.

This can be shown by a sudden rush of voices from them, speaking in frightened, shocking tones. Suddenly the crowd's voices fade as the girls and Abigail speak for the first time, confessing to what they have "seen". They then speak, chanting together in an inaudible rabble, declaring the names of others, as they stand and look to the sky shouting the "accursed" names. The entire crowd would suddenly then fall back in a flash of light as a beam of dark red light falls on the concession of girls. As the crowd cower away the lights dim and the curtains fall, the words "....Goody Procter with the DEVIL" echoes into the darkness. The Crucible has many moments in Act 1 that uses dramatic techniques to emphasize the rising emotions in Salem. In fact the whole of the first Act is the ignition for the deadly bomb that is portrayed through the rest of the play. However I believe that the last part of the first act is the most dramatic. It must have filled the people of Salem with dread and fear as they hear these small na�ve, young girl chanting as if in an estranged trance, sending poor innocent women to their deaths. Ironically they only want to save their own lives from what started as such a small act, as to dance in the woods! Dan Stembridge Page 1 of 4 ...read more.