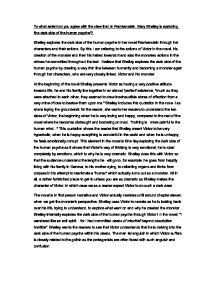 To what extent do you agree with the view that, in Frankenstein, Mary Shelley is exploring 'the dark side of the human psyche'?

To what extent do you agree with the view that, in Frankenstein, Mary Shelley is exploring 'the dark side of the human psyche'? Shelley explores the dark side of the human psyche in her novel Frankenstein through her characters and their actions. By this I am referring to the actions of Victor in the novel, his creation of the monster and then his hatred towards it and also the monsters actions in the crimes he committed throughout the text. I believe that Shelley explores the dark side of the human psyche by creating a very thin line between humanity and becoming a monster again through her characters, who are very closely linked, Victor and his monster. At the beginning of the novel Shelley presents Victor as having a very positive attitude towards life, he and his family live together in an almost 'perfect' existence, "much as they were attached to each other, they seemed to draw inexhaustible stores of affection from a very mine of love to bestow them upon me." ...read more.

All in all, a rather farfetched place to get to unless you are as dramatic as Shelley makes the character of Victor, in which case we as a reader expect Victor to do such a dark deed. The novel is in first person narrative and Victor actually narrates until around chapter eleven, when we get the monster's perspective. Shelley uses Victor to narrate as he is looking back over his life, trying to understand, to explore what went on and why he created the monster. Shelley internally explores the dark side of the human psyche through Victor in the novel, "I wandered like an evil spirit... for I had committed deeds of mischief beyond description horrible". Shelley wants the readers to see that Victor understands that he is delving into the dark side of the human psyche within his deeds. The mental anguish in which Victor suffers is closely related to the gothic as the protagonists are often faced with such anguish and confusion. ...read more.