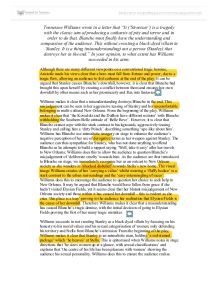 To what extent do you think William wants his Audience to perceive Blanche as a victim ?

Streetcar named Desire To what extent do you think William wants his Audience to perceive Blanch as a victim ? Within the play 'A Streetcar named Desire' one Williams main characters is BlancheDuBois, this character can be seen as a complex individual that provokes strong reactions from the other characters. We know that she has been a schoolteacher in Mississippi but was asked to leave her job because of an involvement with a student, that she was once a 'Southern belle' from a wealthy family, and that she had a failed marriage and that Blanche has fled from her past. Her complexity comes not from her history or background, but from the varied and often inconsistent facades she presents. Throughout the play we get to know more about Blanche and the type of character Williams has really created in contrast to the type of person that she would like everybody else to think she is. Blanche's action when by herself, Blanche's past and her dialogue with others such as Mitch, Stanley and the paperboy allow us to draw a number of conclusions. ...read more.

from being pure and another linking interpretation to this could be seen as a link to the past when her late husband blood stained her dress. This is allows the audience to believe that Williams wants to present the character as a Villain but in contrast to what Blanche tells us 'I tell what I think should be the truth'. Furthermore there can be direct link made between what Blanche wants people to think of her and what other characters think of her. Within the play Williams allows the audience to understand that the theme of Fantasy and Reality reoccurs throughout the play but only making it relevant to the character of Blanche. We are introduced to Blanche as a "delicate beauty" that "must avoid strong light". Williams, portrays Blanche as an uncertain character who hides behind the fantasy of outer beauty and purity but when placed under the spotlight, fails to live up to the person she would like people to think that she, and showing the true reality of her life. Williams shows Blanche as a woman attempting to be 'ladylike' and innocent. ...read more.

A different interpretation of this could be that Blanche has difficulty understanding the passion in her sister's marriage and she believes that they should leave together and create new lives, which are better, showing the fa�ade of her wanting to live in the past in the old south. To draw a conclusion, I believe that to some extent within the play Williams wished for his audience to see Blanche as a victim but he also foreshadows the true explanation of why Blanche has become this way. An Explanation of Blanches behaviour could be because within her youth she watched the older generation of her family die out and the loss of Belle Reve and lastly the suicide of her young homosexual husband, could be seen as the reason why Blanche's emotions died and her sense of reality. Desire and death became linked in her life, which then allowed her to lead a loose and increasingly careless life. I believe that Williams wants the audience to see Blanche as a victim but to also understand why she is, allowing her to receive a form of sympathy and bringing the audience to question whether she truly is a victim. ...read more.

A very effective essay which addresses the question in detail and shows a balanced appraisal of the key characters.