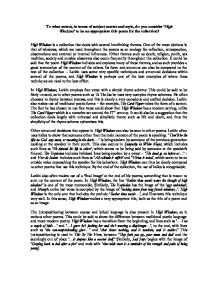 To what extent, in terms of subject matter and style, do you consider 'High Windows' to be an appropriate title poem for the collection?

To what extent, in terms of subject matter and style, do you consider 'High Windows' to be an appropriate title poem for the collection? High Windows is a collection that deals with several interlinking themes. One of the most obvious is that of windows, which are used throughout the poems as an analogy for reflection, retrospection, observations and external or internal influences. Other themes such as death, religion, youth, sex tradition, society and outside observers also occur frequently throughout the collection. It could be said that the poem High Windows includes and explores many of these themes, and as such provides a good summation of the content of the others. Its form and structure can also be compared to the rest of the collection - Larkin uses some very specific techniques and structural decisions within several of the poems, and High Windows is perhaps one of the best examples of where these techniques are used to the best effect. In High Windows, Larkin employs free verse with a simple rhyme scheme. This could be said to be fairly unusual, as in other poems such as To The Sea he uses very complex rhyme schemes. He often chooses to rhyme between stanzas, and this is clearly a very conscious and crafted decision. ...read more.

In this sense, High Windows makes a very appropriate title, both as the title of a poem and as an image. The juxtapositioning between coarse and lyrical language is also present in High Windows, as in various other poems. This coule be said to show the difference between traditional poetic language and more modern poetry. High Windows has a transition from the beginning, and lines such as '...I see a couple of kids...' and '...I guess he's fucking her and she's wearing a diaphragm...', to the end, with lines such as 'the sun-comprehending glass...' and 'that shows nothing, and is nowhere, and is endless.' This juxtapositioning is used in This Be The Verse, between 'They fuck you up, your mum and dad' and the seemingly out of place '...it deepens like a coastal shelf.' Similarly, Sad Steps begins with the image of 'Groping back to bed after a piss' and ends with 'that wide stare is a reminder of the strength and pain of being young'. The theme of observation and looking down through a window is also a common one throughout the collection. The image of High Windows is one that provides an appropriate title, since it could be a metaphor for themes such as reflection upon life, which is clearly prominent in poems such as Sympathy in White Major, Dublinesque and The Explosion. ...read more.

The speaker of High Windows seems to be a middle-aged man looking at teenagers. There is a sense of the cyclic nature of life in this poem, as he also alludes to the fact that someone older than the speaker probably watched him when he was young. This also appears in Annus Mirabilis. The youth of today are often connected with sexual freedom - Larkin is very frank about 'bonds and gestures pushed to one side' allow the young to have sex and be more free. This is similar to the 'sort of bargaining' mentioned in Annus Mirabilis. This Be The Verse also includes the cyclic nature of life. The speaker claims that 'Man hands on misery to man', which suggests that every generation is similar to the last, just slightly different, and this continues throughout all of life. Because High Windows is so similar to many of the other poems and show so well the main themes of the collection, I do think that it is a very appropriate title poem. However, there are also many contradictions within the collection, and so it would be almost impossible to pick one poem that shows every element of the collection. High Windows serves as a good introduction to many of the concepts discussed within the collection, and also paves the way for further exploration of these themes. ...read more.