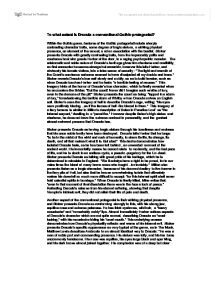 To what extent is Dracula a conventional Gothic protagonist

To what extent is Dracula a conventional Gothic protagonist? Within the Gothic genre, features of the Gothic protagonist include sharply contrasting character traits, some degree of tragic stature, a striking physical presence, an element of the sexual, and an association with the bestial. Stoker presents Dracula with greatly contrasting traits, from the impeccably polite and courteous host who greets Harker at the door, to a raging psychopathic monster. The aristocratic and noble nature of Dracula's heritage gives him charisma and credibility, on first encounter he seems strange but eccentric, however this lulls Harker, and obviously his female victims, into a false sense of security: "The light and warmth of the Count's courteous welcome seemed to have dissipated all my doubts and fears." Stoker reveals Dracula's true self slowly and subtly, so as to build tension, such as when Dracula touches Harker and he feels: "a horrible feeling of nausea." This imagery hints at the horror of Dracula's true character, which is finally revealed when he encounters the Brides: "But the count! Never did I imagine such wraths of fury, even in the demons of the pit!" ...read more.

When Dracula is finally killed, Mina writes that: "even in that moment of final dissolution there was in the face a look of peace." Reflecting Dracula's release from his eternal suffering, showing that despite Vampire's intrinsic evil, they did not relish their life of pain and death. Another aspect of the conventional protagonist is their striking physical presence, and Stoker presents Dracula as conforming strongly to this, with his strong jaw, aquiline nose and extreme paleness. He has thick eyebrows, wild hair, a "heavy moustache" and "remarkably ruddy" lips. Almost immediately Harker notices aspects of Dracula's character which are not quite normal, describing Dracula as "cruel-looking," with his moustache hiding his "cruel mouth." This underlying unease demonstrates how Dracula's physicality reflects and warns of his internal evil. Stoker presents Dracula's specific appearance as very typical of the genre, as in The Monk, Matthew Lewis describes Ambrosia in an almost identical way to Dracula: "He was a man of noble port and commanding presence. His stature was lofty, and his features uncommonly handsome. His nose was aquiline, his eyes large black and sparkling, and his dark brows almost joined together. ...read more.

Finally, Stoker presents Dracula as associating with the bestial, through his control over animals and nature, his connection with the 'other,' and his animalistic consciousness. When Harker arrives at the castle, Stoker immediately connects animals with the Count through the images of wolves: "All at once the wolves began to howl as though the moonlight had some peculiar effect on them." Dracula's control over animals is one aspect of his foreign and unknown nature, reflecting Victorian fear of the barbarianism of the supposedly unrefined central Europeans. Dracula can transform himself into a giant bat, which appears as a menacing presence throughout the novel: "there was a sort of scratching or flapping at the window." Dracula's strange social behaviour and physical presence demonstrates how he is not quite human, and it seems that he certainly relates to animals more than he does to other people: "Ah, sir, you dwellers in the city cannot enter into the feelings of the hunter." Ultimately it is Stoker's portrayal of Dracula as a character completely driven by primal desires that associates him with the animal, and any feelings he represses ultimately become apparent. This characteristic along with the others demonstrate how Dracula is primarily a conventional protagonist in his looks and character traits, his doom and his desires. ...read more.

This essay responds strongly to the task. There is a clear appreciation of what characteristics build a gothic protagonist. I would've liked to have seen some appreciation that Dracula is the villain in the novel, and how this affects ...

This essay responds strongly to the task. There is a clear appreciation of what characteristics build a gothic protagonist. I would've liked to have seen some appreciation that Dracula is the villain in the novel, and how this affects the reader's perceptions of him. It can be argued that the reader should sympathise with the curse of vampirism, and this critique could've been weaved into the essay. I liked the intertextuality used, as this shows a thorough understanding of the gothic as a genre.

The analysis here is strong, but there needs to be more focus on the response of the reader. After looking at techniques, the discussion is sustained with comments such as "Reflecting Dracula's release from his eternal suffering, showing that despite Vampire's intrinsic evil, they did not relish their life of pain and death." However, to reach the top bands at A-Level, I feel this essay needs to go further to discuss what effect this technique has. I would be asking myself "Why has Stoker constructed Dracula like this?", looking directly at the reception of the novel. There are some comparisons to Milton's Satan, but I don't feel there is enough textual evidence. There are some great quotes in Dracula such as "demonaic fury", "devil in callous" and "a grimace which would hold its own in the nethermost of hell" which would allow a detailed discussion around his image as a devil. Sometimes the best quotes are not used here, and this prevents this essay from reaching the top bands.

I'm not the biggest fan of the structure here. The introduction is used to analyse, whereas I feel it should be wholly setting up a strong and convincing starting point for the argument. Similarly, there is no conclusion, and this essay misses the opportunity to directly address "to what extent" Dracula is a conventional protagonist. The style, however, is strong, and I like how there is always reference to Stoker constructing the novel. Some essays tend to retell the story as if events actually happened, whereas this essay has a clear appreciation of Stoker's role. Spelling, punctuation and grammar are fine.