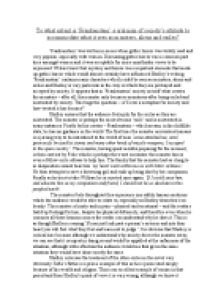 To what extent is Frankenstein a criticism of societys attitude to accommodate what it sees as monsters, aliens and exiles?

﻿To what extent is ?Frankenstein? a criticism of society?s attitude to accommodate what it sees as monsters, aliens and exiles? ?Frankenstein? was written in an era when gothic horror was widely read and very popular, especially with women. Discussing gothic horror was a common past time amongst women and it was acceptable for more unorthodox views to be expressed. Writers knew that mystery and horror were important elements that made up gothic horror which would almost certainly have influenced Shelley?s writing. ?Frankenstein? contains many characters which could be seen as monsters, aliens and exiles and Shelley is very particular in the way in which they are portrayed and accepted by society. It appears that in ?Frankenstein? society is itself what creates the monsters ? after all, the monster only becomes monstrous after being exiled and mistreated by society. This begs the question ? is Victor a metaphor for society and how twisted it has become? Shelley ensures that the audience feels pity for the exiles as they are mistreated. ...read more.

here because although we understand why society drives the monster away, we can see that it is unjust in doing so and would be appalled at the unfairness of the situation, although with reflection the audience would see that given the same situation they would have done exactly the same. Shelley criticises the treatment of the other exiles in the novel very obviously. Safie?s father is a prime example of this as he is persecuted simply because of his wealth and religion. This is an excellent example of racism in that period and from Shelley?s point of view it is very wrong, although we know it happened on a large scale throughout history. It is interesting that he is never given a name in the text, being referred to as ?The Turk? or ?Safie?s father?, perhaps this is to stop they audience from becoming emotionally attached because Shelley feels that he does not deserve pity after he breaks his promise to Felix. ...read more.

He allows himself to be overcome by fits and refuses to deal with what he has created. It is this cowardice that would annoy the reader and when Victor does finally decide to do something about the monster he has already allowed his entire family to die by the hands of the being he created. Even when he has the chance to save their lives by creating a companion for the monster he chooses to condemn the world rather than help the monster. Still society does not shun Victor, apart from when he is a murder suspect, and continues to accept him although it is clear to the reader that the ?monster? is actually Victor and not his creation. ?Frankenstein? is clearly a criticism of society?s attitude towards anything it considers ?wrong?. Shelley is clever in writing this through a popular medium therefore it reaches many people and should make them, at least subconsciously, reconsider what they see as monsters as they have now had the chance to understand exactly how an exile would feel. Jessica Ellis ...read more.