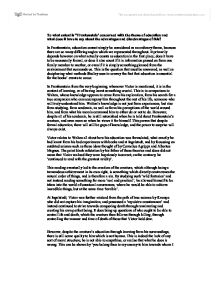 To what extent is ''Frankenstein' concerned with the theme of education and what does it have to say about the advantages and disadvantages of this?

To what extent is ''Frankenstein' concerned with the theme of education and what does it have to say about the advantages and disadvantages of this? In Frankenstein, education cannot simply be considered as an ordinary theme, because there are so many differing angles which are represented throughout. It primarily depends however on what actually counts as education in the first place; does it have to be necessarily formal, or does it also count if it is information passed on from one family member to another, or even if it is simply something gleaned from the environment that surrounds us. This is the question that must be answered, as well as deciphering what methods Shelley uses to convey the fact that education is essential for the books' events to occur. In Frankenstein from the very beginning, whenever Victor is mentioned, it is in the context of learning, or of having learnt something crucial. This is in comparison to Walton, whose knowledge appears to come from his exploration, from his search for a true companion who can accompany him throughout the rest of his life, someone who will truly understand him. Walton's knowledge is not just from experiences, but also from studying, from academia, as well as from his perceptions of the world around him, and from what his morals command him to either do or not to do. ...read more.

This can be shown by 'you belong then to my enemy-to him towards whom I have sworn eternal revenge; you shall be my first victim.' Perhaps in some way he acknowledges it as wrong, but due to his previous experience with the people in the cabin, he now no longer wishes to be like them, and wants to separate himself from society. This separation means he then becomes particularly cold blooded, but he does know that it will prove effective in affecting Frankie. Due to the creature describing his 'heart swelling with exultation and triumph', it demonstrates that to some extent the creature has developed sophisticated planning, because it was not spur of the moment (the fact that there is no regret mentioned proves this). The creature has learnt to be cold from his 'father's' abandonment of him, and the people in the cabin rejecting him solely on the basis of physical appearance. Therefore he has learnt that to cause emotional suffering is the best way to commit revenge; the preferred method of hurt is to destroy someone's heart. The creature's knowledge did not turn out to have a positive effect on anyone's life, but rather ended up causing several deaths and miserable lives for many. ...read more.

How a new creature made from death can still have life, particularly have its own mind is uncertain, especially when we consider that the creature must suddenly have had a consciousness emerge out of oblivion, but all we know is that there must be something real about it for it to be able to affect the lives of real humans. Whether or not education is simply learning how to live by gathering and experiencing simple pleasures, having sufficient food, and utilising fire depends on what and who is being asked, but surely anything that is learnt counts as a sort of education in its own way. Learning through experience means that on the plus side, you know what you have learnt is true, and you know what will work best in a certain set of circumstances, but when you arrive at something new and unfamiliar, trial and error (error being the key point) is the only way forward. Frankenstein in a way is all about education, particularly when it comes to the misuse of formal education, and mistakes made, but because not all of the plot details in the end come down to a matter of education, it therefore cannot be deemed to be the key theme of the novel. ?? ?? ?? ?? ...read more.