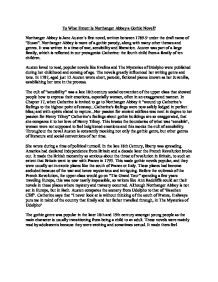 To What Extent Is Northanger Abbey a Gothic Novel?

To What Extent Is Northanger Abbey a Gothic Novel? Northanger Abbey is Jane Austen's first novel, written between 1789-9 under the draft name of "Susan". Northanger Abbey is more of a gothic parody, along with many other themes and genres. It was written in a time of war, sensibility and liberation. Austen was part of a large family, which is reflected in our protagonist Catherine: the fourth child from a family of ten children. Austen loved to read, popular novels like Evelina and The Mysteries of Udolpho were published during her childhood and coming of age. The novels greatly influenced her writing genre and tone. In 1787, aged just 12 Austen wrote short, parodic, fictional pieces known as her Juvenilia, establishing her tone in the process. The cult of "sensibility" was a late 18th century social convention of the upper class that showed people how to express their emotions, especially women, often in an exaggerated manner. In Chapter 17, when Catherine is invited to go to Northanger Abbey it "wound up Catherine's feelings to the highest point of ecstasy...Catherine's feelings were now safely lodged in perfect bliss; and with spirits elated to rapture...Her passion for ancient edifices was next in degree to her passion for Henry Tilney" Catherine's feelings about gothic buildings are so exaggerated, that she compares it to her love of Henry Tilney. This breaks the boundaries of what was "sensible", women were not supposed to feel heightened emotions and this mocks the cult of sensibility. ...read more.

Tilney has concocted a hypothetical story identical to the events that happen. Austen uses free indirect style, contrasted with direct and indirect speech throughout the whole novel. It allows her to express the feelings and emotions of characters to the reader, without having the character state it themselves. This type of narration merges both third-person and first-person aspects, giving both internal and external viewpoints, which can sometimes give an ironic tone. Throughout the novel, Catherine is infatuated with gothic settings to such and extent that she is always associating things with events from the novels. In chapter 11, it is raining and Catherine says "Oh! That we had such weather here as they had at France, or at least in Tuscany and the South of France! - the night that poor St. Aubin died! - such beautiful weather!" St Aubin is the father of Emily: the heroine from Udolpho. Catherine doesn't just want beautiful weather; she wants the weather from Udolpho. Then later on in the chapter, Isabella and John Thorpe and her brother James come to take her to visit Blaize Castle and she asks "But is it like what one reads about?...the delight of exploring an edifice like Udolpho, as her fancy represented Blaize Castle to be, was such a counterpoise of good." Even though Catherine is expecting Eleanor Tilney to call on her, she is fascinated with visiting a place like in Udolpho. Also, the novel has gothic settings and lexis. ...read more.

realizes her stupidity at having thought such ideas about the General and feels ashamed of herself and upset that she might've ruined her relationship with Henry. Also, Henry finally stands up to their father because of his feelings towards Catherine and her mistreatment "He steadily refused to accompany his father into Herefordshire, an engagement formed almost at the moment to promote the dismissal of Catherine, and as steadily declared his intention of offering her his hand. The general was furious in his anger, and they parted in dreadful disagreement". So, not only does Catherine grow through the novel, but Henry also. Because of this, Northanger Abbey is a rite of passage. For a young writer Jane Austen's range of techniques and vocabulary is extensive. She uses a lot of hyperbole, the narration is exaggerated to a point where it is either ironic, humorous or both in some cases, for example in chapter 17, General Tilney's speech to Catherine is very long and elaborate, and all he is asking of her is to visit the abbey for a fortnight. He says "I am almost ashamed to make the request, though it's presumption would certainly appear greater to every creature in Bath than yourself" His lexis is very exaggerated to flatter Catherine. In conclusion, Northanger Abbey is a gothic novel to some extent, but it is more of a gothic parody. Jane Austen's range of techniques ranging from the narration to the ironic and sometimes amusing tone makes Northanger Abbey a parody of gothic novels, with the characteristics of a romance novel, rite of passage. ...read more.