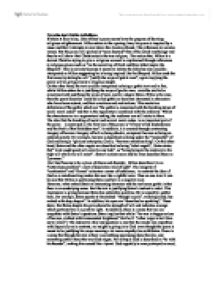 To what extent is Paradise Lost a gothic text?

Paradise lost-Gothic definitions. If taken at face value, John Milton's poem seems have the purpose of showing religious enlightenment. Milton states in the opening lines, his poem is inspired by a muse and that it attempts to soar above the Aeonian Mount. The references to aeonian mount, that the poem will spiritually "soars beyond" that of the Greek mythology and thus he will show that Christianity is the true religion; The notion that, Milton is a devout Christian trying to give a religious account is emphasised through references to religious places such as "on the secret top of Oreb and Sinai didst inspire the Shepard". This is not only because it seems to imitate the bible but also could be interpreted as Milton suggesting he is being inspired like the Shepard. Milton ends the first verse by stating he will "justify the ways of god to men", again implying the poem will be giving almost a religious insight. ...read more.

For example, heaven is described as being under the "monarchy" of God and being a "glorious enterprise; God is, "heavens matchless king". On the other hand, Satan and the other angels are described as being "rebel angels"; Satan states that" to do ought good will never be our task", as "being being to the contrary to his high will whom we will resist" . Satan's actions seem and he even describes them as "perverse." Hell itself seems to be a place of chaos and disorder; Milton describes it is as "bottomless perdition" a seat of desolation void of light". The imagery of "combustion" and "flames" reiterates a sense of turbulence, in contrast the idea of God as a matchless king makes him see like a rightful ruler. Thus on one level it can be said that Milton is portraying Satan and hell in a negative way. However, what makes Satan an interesting character and the text seem gothic is that there is an underlying sense that the text is justifying Satan's instinct to rebel. ...read more.

are condemned to heaven to "suffice [god's] vengeful ire" ;God is subjecting Satan to unnecessary pain. Overall, it be said that the definition that the gothic the supernatural intertwined with ordinary, is accurate in this poem as, the themes of humans desire to rebel is a common theme people can identify with and goes back to Adam and eve, yet the poem is set in a supernatural setting. Infact the poem can be seen as a poem as very specific to what Milton was experiencing and thus even more ordinary as it was people could directly relate to. At the time, in which this was written in, parliament was in civil war against Charles the 1st. Arguably, through the language, it can be interpreted Satan and the angels represent parliament, whilst God represents monarchy. Thus, the poem fits even more so the criteria of ordinary intertwined with the supernatural. This impression is giving through hell as a" bottomless perdition with adamantine chains and penal fire". Here the idea of adamantine, conjures the image of the dungeons of the time; Imagery of "darkness" and a bottomless pit. ...read more.