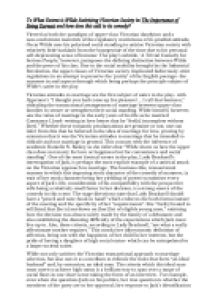 To what extent is Wilde satirising Victorian society in The Importance of Being Earnest and how does this add to its comedy?- ALTERED

﻿To What Extent is Wilde Satirising Victorian Society in The Importance of Being Earnest and how does this add to its comedy? Viewed as both the paradigm of upper-class Victorian dandyism and a non-conformist maverick of the regulatory restrictions of its prudish attitude, Oscar Wilde uses his polarised social standing to satirise Victorian society with relatively little backlash from the bourgeoisie of the time due to his personal self-deprecating sense of humour. The play?s subtitle, ?A Trivial Comedy for Serious People,? however, juxtaposes the defining distinction between Wilde and the peers of his class. Due to the social mobility brought by the Industrial Revolution, the upper classes of Victorian society implicated ludicrously strict regulations in an attempt to preserve the ?purity? of the English peerage- the manners in and aspects through which being perhaps the principle subject of Wilde?s satire in the play. Victorian attitudes to marriage are the first subject of satire in the play- with Algernon?s ?I thought you had come up for pleasure? ... I call that business,? ridiculing the transactional arrangement of marriage between upper-class families to secure or strengthen their social standing. Wilde himself, however, saw the value of marriage in the early years of his life as he married Constance Lloyd- writing in love letters that he ?feel[s] incomplete without [her].? Whether these romantic proclamations are genuine or not, one can ...read more.

interpreted as a droll self-parody for Wilde?s preference for the artificial over the natural, a common characteristic of both Dandy and Aesthetic figures. While satirical remarks in his earlier society comedies are consciously expressed by the more intelligent characters, Wilde employs paradoxical, absurd statements through such less sophisticated characters as Lady Bracknell in his final comedy to create a form of unintentional ironic satire for the very society which she epitomises, the reason for this being that Wilde?s humorous intention in this play is subtler, more sophisticated than his earlier works. Being the Grande Dame of the play, yet also comedically foolish is in itself a form of satire, with fact that her literary function completely contrasts the character?s intent in her words. Her opinion on Victorian education, for example, ?the whole theory of modern education is radically unsound. Fortunately in England, at any rate, education produces no effect whatsoever? not only satirises her ridiculous need to conserve the class system, but also makes a sincere point about the prescriptive nature of the Victorian education system, further satirised by Wilde in the education of Cecily. As is Lady Bracknell?s character, in this epigram she makes critical analysis of Victorian society without apparent awareness on her part. Wilde also satirises marriage from the perspective that dishonest interludes- perhaps by extension infidelity, are the only means by which one can ?survive? a marriage, yet still keeping the impression of idealistic morality and gentlemanliness. ...read more.

The next day I bought this little ring in your name, and this is the little bangle with the true lover's knot I promised you always to wear” is in the ludicrously intricate detail- and her lack of reservation when reciting it to him, and the complete ease with which he receives it in his blasé response “did I give you this? It's very pretty, isn't it?” Another victim of Wilde’s satire is the sanctimony and hypocrisy with regards to virtue of Victorian upper class society. The two protagonists, Jack and Algernon, are both “bunburyists” in that they use fictional moral excuses to excuse themselves for any genuine tie which would not entertain them- Algernon using his “permanent invalid called Bunbury” and Jack using his alter-ego of Earnest. Therefore, Wilde satirises the Victorian insistence in being prudish and religious in two characters who, deep inside, are just as regular as anybody else, and maybe even less virtuous. To conclude, Wilde’s use of satire in The Importance of Being Earnest is of a didactic yet humorous nature to make the Victorian upper class reflect on their regulated, restrictive attitude to every aspect of life. The play’s subtitle, “A Trivial Comedy for Serious People” encapsulates Wilde’s aim to convey the message that these aristocrats take insignificant, “trivial” aspects of their lives, for example the need for “cucumber sandwiches”, due to their upper-class connotation, and take them to an superfluously grandiose levels to express their superior social status. ...read more.