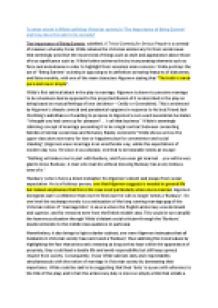 To what extent is Wilde satirising Victorian society in The Importance of Being Earnest and how does this add to its comedy?

﻿To what extent is Wilde satirising Victorian society in ?The Importance of Being Earnest? and how does this add to its comedy? The Importance of Being Earnest, subtitled, A Trivial Comedy for Serious People is a comedy of manners whereby Oscar Wilde rebukes the Victorian aristocracy for their social issues that seemingly prioritise the most trivial of things such as style and appearance above those of true significance such as. Wilde further achieves this by incorporating elements such as farce and melodrama in order to highlight their senseless main concerns. Wilde portrays the act of ?Being Earnest? as being in opposing to its definition as having features of dishonesty and false morality, with one of the main characters Algernon stating that ?The truth is rarely pure and never simple?. Wilde?s first satirical attack in the play is marriage. Algernon is shown to perceive marriage to be a business deal as opposed to the projected illusion of it as described in the play as being based on mutual feelings of love (evidence ? Ceclily or Gwendolen). This is evidenced by Algernon?s sharply comical and paradoxical epigrams in response to his best friend Jack Worthing?s admittance of wanting to propose to Algernon?s own ward Gwendolen he states: ?I thought you had come up for pleasure? ... I call that business.? Wilde is seemingly satirising concept of marriage presenting it to be a legal contract between consenting families of similar social class and fortunes; Baxley comments ?Wilde shows us how the upper class does not marry for love or happiness but for convenience and social standing?.)Algernon views marriage in an unorthodox way, unlike the expectations of modern day now. ...read more.

?It has a its philosophy that we should treat all the trivial things of life seriously, and all the serious things of life with sincere studied triviality?. This is shown through Lady Bracknell?s ?interview? of Algernon in Act 1. Wilde ridicules the concept of marriage suitability by utilising the linguistic device of juxtaposition of her serious questions ?Are your parents living?? with the more frivolous ?What number in Belgrave Square?? Wilde evidently is undermining the gravity and importance of marriage in the eyes of the upper class as it highlights the frivolity of Victorian aristocracy attitudes towards the process of finding a marriage partner. This is the case especially surrounding serious matters. Wilde further insinuates Lady Bracknell views the status of Algernon?s parents, (a commonly asked question in the era of which the upper class are trying to find a suitable marriage partner) of equal importance to which number house Algernon lives in (as where he lies is in a highly regarded area of London the number should be of no concern). [b] Satire is further explored through Lady Bracknell herself who is a comic device employed by Wilde to satirise the hypocrisy and shallow moral values of the Victorian upper class society. As a stock character from the comedy of manners, her attributes are heavily based on the stereotypical views, making her a component for parody to create humour whilst highlighting the undesirable traits of the society at the time. Wilde portrays morals as inverted in which they are trivial and something not to be taken serious ??I do not propose to undeceive him. ...read more.

anybody manages to exist in the country, if anybody who is anybody does...? Wilde purposely gives extremely similar characteristics between Gwendolen a ?town girl? and Cecily a ?country girl? with them both having a fixation upon the name ?Ernest? and falling helplessly in ?love?, both believing that anything written down is automatically the truth (their diaries) and both prevailing upon the importance of fashion and style. Cecily is describes as being ?a sweet simple, innocent girl? and Gwendolen is depicted as ?a brilliant, clever, thoroughly experienced lady? although these claims from Jack and Algernon show them to be contrasting; further exploration shows them to have more similarities than differences despite their contrast in upbringing, and what common expectations would be of a town and country girl. Wilde does this to satirise love and romance by showing the falsity and superficiality of the upper class despite being in the town or country they have the same morals, ideals and fixations. The difference that is perceived by the different location of their upbringing/hometown is shown to be not as different as it seems. To conclude, it is fair to say that Wilde has incorporated many forms of comedy however, I believe that satire is the largest component of the play but does require the intelligence for a thorough understanding that lends the play a stylish flair. The satirical nature of the play allows Wilde to adopt this didactic tool and ridicule Victorian concepts of earnestness, marriage and morals yet using the comedy to mask his underlying social commentary and making it socially acceptable to criticise. ...read more.