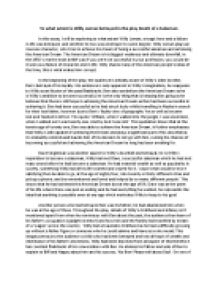 To what extent is Willy Loman betrayed in the play Death of a Salesman?

﻿To what extent is Willy Loman betrayed in the play Death of a Salesman In this essay, I will be exploring to what extent Willy Loman, a tragic hero and a failure in life was betrayed, and whether he too was a betrayer to some degree. Willy Loman plays an insecure character, who tries to achieve his dream of being a successful salesman and achieving the American Dream. The American Dream is his biggest weakness and ultimate downfall, in the 1950?s era the main belief was if you were not successful in your profession, you would be it seen as a failure of character and in life. Willy shares many of the American people?s ideas of the time; this is what makes him corrupt. In the beginning of the play, the audience is initially aware of Willy?s older brother, Ben?s betrayal of his loyalty. His existence is only apparent in Willy?s imagination; he reappears to Willy as an illusion of the past/flashbacks. Ben also symbolizes the American Dream as he is Willy?s ambition to become successful, he is the only thing that is keeping him going as he believes that there is still hope in achieving the American Dream as Ben had been successful in achieving it. ...read more.

Willy believes that being successful is only achieved by an individual?s personal gain and quality, ?...be well liked and you shall never want?, this quotation emphasises that success will give you everything that one needs and that they shall never have this need ever again. Willy leads Biffs? life to astray as whilst during one of his flashbacks, he brings to Biffs attention that he can be better and more successful than Bernard, ?you are going to be five times ahead of him?, which proves to be ironically wrong as Bernard becomes a successful lawyer whereas Biff is stuck working at a ranch or being unemployed. Willy persuades both of his sons to conform to the ?dream? by speaking of his brother?s wealthy achievement, the quote ?there was a man who started out with the clothes on his back and he ended up with diamond mines?, outlines to Biff and Happy a role model for them to pursue and follow. Biff in his own way had achieved the American Dream as he was happy, popular and settled his life whereas in Willy?s perspective his wasn?t financial stable which is the main basis of the dream. ...read more.

He doesn?t seem to alter his perception of the dream; he doesn?t believe that the business of selling changes, the audience are although aware that his distorted version of American Dream is probably the ultimate betrayer. His core belief that America is a ?land of opportunity? perceives himself as weak, as he struggles to come to terms with being unsuccessful and a failure in life. However, he may have not been able to face facts as he knew that he would be completely excluded from all the success around him, Bernard being one of them. To conclude from this, overall I consider Willy to be the main betrayer as he has been the most influential character in the play. He had an impact on his son?s lives he deprived them from achieving success, i.e. Biff from working with Bernard, a successful lawyer who had idolised Biffs? popularity when they were children. The play can be depicted as an explanation of the American system, a true understanding of what it is like to be an American citizen. The characters knowingly differentiate between success and failure as the system is not the one responsible. Willy can only be at fault for not becoming what he wanted to be. ...read more.