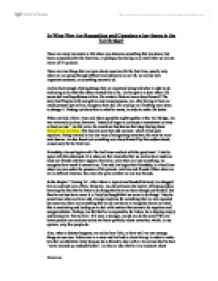 toll bridge In What Way Are Recognition and Conscious a key theme in the Toll Bridge?

In What Way Are Recognition and Conscious a key theme in the Toll Bridge? There are many moments in life where you discover something that you knew, but know consciously for the first time, or perhaps, the feeling is so minor that we are not aware of it's present. There are also things that we learn about ourselves for the first time, usually only when we are going through difficult and odd parts in our life, we realise how important someone, or something means to us. Jan has had enough of doing things that are expected, being told what is right to do and trying to be what the others wanted him to be. Jan has got to a state where life seems dull and hopefulness to him. He wants to find out more about himself. The story itself begins with recognition and consciousness. Jan, after having to have so much pressure put on him, recognize how dull life could go on if nothing were done to change it. Finding out about him is what he wants, in order to make life better. When Jan had a fever, Tess and Adam spend the night together at the Toll Bridge. ...read more.

We can never predict our reactions unless we know perfectly about ourselves, which, in my opinion, very few people do. Also, when a disaster happens, we realise how little, or how well we can manage things on our own. Adam was in a mass and Jan had to clean him up in order to make him feel comfortable. Only because he is forced to deal with it, he realises that he had ' never cleaned up anybody before'. Jan has no idea that he is so reluctant about cleaning bodies consciously; he does not like 'the idea of messing with another person's gunged - up body'. On the other hand, after Jan cleaned Adam up and tend his wound, he is proud of himself as he never thought that he could manage these on his own, by himself. It is something new he learns about himself for the first time, finding out a good quality of himself. Perhaps, this is why it is good to take challenges sometimes, just to 'unearth' some good quality and a new side of ourselves. This is what Jan wants, 'to find out who he really is'. ...read more.

Jan realises how hash he has been on Gill after she has given up on him. When he gazes at her processions one by one, then he suddenly notices how 'unthinking',' unfeeling' and 'unknowing' he has been to Gill. He has no idea that he would show such a nasty attitude towards her. He regrets of being so horrible to her, but it is too late, recognition always happens after the event, after you can have chance to change the situation. Knowing yourself and recognition seem to appear together, they are similar in a way. In some occasions, when you recognise something around you or about yourself, it might be something so minor that is though to be new, therefore considers as knowing yourself for the first time, but actually, you knew it unconsciously without being aware of the reorganisation. In 'The Toll Bridge', no only is it base on these two main themes, but it is also about how Jan and Tess acknowledge themselves; their sexual recognition. The way Jan considers relationships between friends and girlfriends are re-recognised, they are seen differently as they were. Jan knows more about himself and other people that are affected by him. For most of all, the aim of his arrival to' The Toll Bridge' is To' find out who he really is', which Jan has accomplished. Alice Lee ...read more.