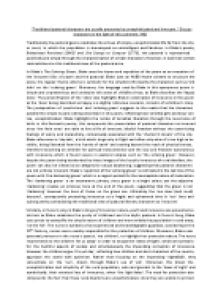 Traditional pastoral characters are usually presented as unsophisticated and innocent. Discuss in relation to Brideshead Revisited, She Stoops to Conquer and Blake

﻿?Traditional pastoral characters are usually presented as unsophisticated and innocent.? Discuss characters in the light of this comment. (40) Traditionally the pastoral genre celebrates the virtues of simple, unsophisticated life far from the city or court, in which the population is stereotyped as unintelligent and fatuitous. In Blake?s poetry, Brideshead Revisited (1945) and She Stoops to Conquer (1773), the pastoral is represented positively and simply through the characterisation of certain characters. However, in each text certain contradictions to this traditional view of the pastoral arise. In Blake?s The Echoing Green, Blake uses the rhyme and repetition of the poem as an evocation of the innocent bliss of youth and the pastoral. Blake uses an AABB rhyme scheme to structure the piece, the regular rhyme scheme is symbolic for the simplistic life lead by the characters such as ?old John? on the ?echoing green.? Moreover, the language used by Blake in this eponymous poem is simple and unpretentious and underpins this sense of childlike virtue, as Blake describes the ?happy skies?. The personification of the ?skies? also highlights Blake?s celebration of innocence in this poem as the ?skies? being described as happy is a slightly ridiculous scenario, mimetic of a children?s story. The juxtaposition of ?youth-time? and ?echoing green? suggests to the reader that the characters parallel the simple bucolic setting described in this poem, reflecting how ?all (the) girls and boys? are too, unsophisticated. Blake highlights the notion of Arcadian liberation through the recurrence of birds in this Romantic poetry, this compounds the presentation of pastoral characters as innocent since ?the ...read more.

The nurse is presented as jealous of the innocence of the children through use of colour. Blake describes how her ?face turn(ed) green?, ?green? could reference jealousy, furthermore it could indicate a malady possibly due to her age, which is why she wishes to return to ?the days of (her) youth?. The fact the nurse tries to vicariously enjoy the children?s innocence, ?voices of children?, suggests she is nostalgic for her own ?youth? which implies that this rural nurse doesn?t wish to be experienced and sophisticated but rather, ignorant to the ?dews? in the world just like the children. The nurse?s longing for the past suggests she?s living her life in a counter-productive way, implying she is stereotypical of a country bumpkin; unsophisticated, unproductive and nostalgic. Similarly in Brideshead Revisited, the character of Sebastian; who has spent a considerable amount of time living at the ?enchanted palace? of Brideshead, is presented to be ?in love with his own childhood?. Waugh symbolises Sebastian?s innocent nature which has been indulged by his time at rural Brideshead, through the motif of Aloysius, his teddy bear. Waugh uses direct speech though Sebastian towards the ?old bear?, this highlights Sebastian?s simple nature as he references his ?bear? as if it were real, just as a child would do. St. Aloysius Gonzaga in Catholicism; a religion to which Sebastian belongs, is the patron of youth, which reinforces Sebastian?s firm attachment to his innocence. Furthermore, Sebastian refers to his mother using the endearing, childlike term ?mummy? which suggests he is vulnerable and reliant on parental guardianship, much like the children in Blake?s Nurse?s Song. ...read more.

The song sung in said alehouse by Tony perpetuates the fact that he lives the unprosperous life of a rural dweller. The words ?nonsense? and ?learning? are juxtaposed in the lyrics to show Tony is uninterested in education, and furthermore that he is a lazy and unambitious character; which is how country folk can be presented to behave in the pastoral genre, which complements Vicki Janik?s description of Tony as ?the most ignorant of the country bumpkins?. Nonetheless, Goldsmith establishes Tony?s character as much more than this, as he is able to deceive the town folk into believing Hardcastle?s home is ?an inn.? Tony?s deception is also rather profound as he diverts Marlow and Hastings from the ?long, dark, boggy? road that they intended to travel. The numerous adjectives listed shows Tony as a rather manipulative character with more intelligence than was first shown, which is an anti-pastoral presentation of Tony considering country folk were thought to be innocent and welcoming. Through this Goldsmith challenges the stereotypes of the country, as Tony, an unsophisticated country dweller is able to mislead the town folk with supposed ?excellent understanding?. This farce encompasses the themes of appearances and stereotypes into the plot and undermines the simplicity of Tony and the other pastoral characters. In all three texts, the traditional pastoral which celebrates idyllic country life where drinking, enjoyment and singing are paramount is profoundly exemplified through the utilisation of characters. However, each writer clearly establishes a more complex undertone which challenges the stereotypes of unsophistication and innocence associated with the pastoral and thus suggests that pastoral characters can be deceiving and demonstrate characteristics contextually associated with the ?refined? population of the town. ...read more.