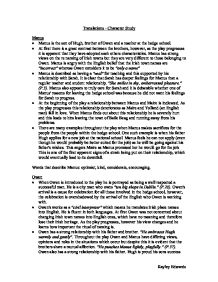 Translations - Character Study Manus * Manus is the son of Hugh, brother of Owen and a teacher at the hedge school. * At first there is a great contrast between the brothers, however, as the play progresses it is apparent that they have adopted each others characteristics. Manus has strong views on the re naming of Irish towns but they are very different to those belonging to Owen. Manus is angry with the English belief that the Irish town names are "incorrect" whereas Owen considers it to be "only a name" * Manus is described as having a "zeal" for teaching and this supported by his relationship with Sarah. It is clear that Sarah has deeper feelings for Manus than a regular teacher and student relationship. "She smiles in shy, embarrassed pleasure." (P.3). Manus also appears to truly care for Sarah and it is debatable whether one of Manus' reasons for leaving the hedge school was because he did not want his feelings for Sarah to progress. * At the beginning of the play a relationship between Manus and Maire is indicated. As the play progresses this relationship deteriorates as Maire and Yolland (an English man) fall in love. When Manus finds out about this relationship he is severely hurt and this leads to him leaving the town of Baile Beag and running away from his problems. * There are many examples throughout the play when Manus makes sacrifices for the people from the people within the hedge school. ...read more.

Words that describe Hugh: intelligent, respected, controlling. Maire * Maire is a student at the hedge school. She brings in the theme of romance and love into play. Her involvement and eventual mutual love for Yolland leads to the departure of Manus because he is so overcome with jealousy. At the beginning of the play Maire and Manus appeared to have had a romantic history together. As the play progresses and Yolland arrives on the scene their relationship rapidly deteriorates. * Maire has an interest in the English language and people. She has a desire to emigrate and build a better future for herself. She believes that learning English will improve her chances of this. "We should all be learning to speak English." (P.24). Words that describe Maire: Independent, ambitious, strong minded. Yolland * Yolland is an English lieutenant who has been sent to Ireland to standardise Irish place names into English. * Yolland develops a love for Ireland and its culture. He desperately wants to integrate with the Irish and is eager to please but feels restricted because of the nature of his work. Yolland feels comfortable in Ireland. He feels a sense of belonging and longs to stay in the country. "Do you think I could live here?" (P.45). Yolland also becomes protective over the Irish names and resents changing them. Let's leave it alone. There's no English equivalent for a sound like that." (P.39). * When Yolland is first aquatinted with the Irish he feels like an outsider yet he has a connection with Maire. ...read more.

She reports the events and news of the local community. "And wait till you hear this" (P.17). * She has a partnership with Doalty and they both bring humour to the play. * She is described as being quite vain. This is apparent when she asks Sarah to hold her mirror for her. * As with Hugh she introduces new people to the play such as Nellie Ruadh and her baby and also refers to her partner Seamus often. This gives a sense of a close community. "Our Seamus says two of the soldiers' horses were found last night." (P.15). Words that describe Bridget: Gossip, reporter, light hearted, humorous. Sarah * Sarah is one of the first characters to appear in the play. She is a pupil at the hedge school and is taught by Manus. Sarah has been considered "locally dumb" all her life because she has a bad speech defect. As the play progresses Sarah is able to say her name, however, towards the end of the play Lancey scares Sarah back into silence. * The way Manus treats her is important to Sarah. It is evident she cares about him deeper than on a teacher level. Manus' gentle coaxing at the beginning of the play works and Sarah is comfortable enough to talk in his company. She tries to impress Manus and is devastated when Owen arrives on the scene and Manus' attention is diverted from her to Owen. "Manus ignores Sarah. He is much more interested in Owen now." (P.30). * Sarah is described as "waiflike" and it is not easy to guess her age. Her appearance represents her shy, background character. Words to describe Sarah's character: Shy, background character. Kayley Edwards ...read more.