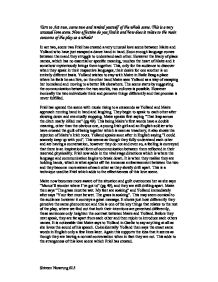 Turn to Act two, scene two and remind yourself of the whole scene. This is a very unusual love scene. How effective do you find it and how does it relate to the main concerns of the play as a whole?

Turn to Act two, scene two and remind yourself of the whole scene. This is a very unusual love scene. How effective do you find it and how does it relate to the main concerns of the play as a whole? In act two, scene two Friel has created a very unusual love scene between Maire and Yolland who have just escaped a dance hand in hand. Soon enough language comes between them and they struggle to understand each other. However the litany of place names, which has no essential or specific meaning, touches the heart of Maire and it somehow mysteriously brings them together. This, only for the audience to discover when they speak in their respective languages, their desire for one another is on entirely different basis. Yolland wishes to stay with Maire in Baile Beag a place where he feels he can live, on the other hand Maire sees Yolland as a way of escaping her homeland and moving to a better life elsewhere. The scene starts by suggesting the communication between the two worlds, two cultures is possible. However ironically the two individuals think and perceive things differently and that promise is never fulfilled. ...read more.

Maire next tries a sentence which her aunt taught her and this stirs such an excited response from Yolland that she thinks her aunt Mary might have taught her something sexually provocative. Yolland on the other hand is so fascinated by her English that he fails to recognise Maire's English sentence as a text book phrase. To add to this misconception Yolland extends his hand to Maire and Maire misinterpreting it moves away. Yolland is now desperately trying to attract Maire's attention, he tries twice calling both her name and her nickname but none prevail. It is this next attempt that we realise it is this that makes the scene such an unusual love scene. Yolland begins using Owens litany of place names to attract Maire "Bun na hAbhann". By doing this Friel creates an emotionally charged atmosphere as Yolland 'softly, almost privately' recites these names to her as though he were reciting a love poem. After the second name is said, Maire finally stops and Yolland is encouraged and he is soon after joined by Maire. We can notice that these names begin to shorten in length as they get physically closer which suggests a slight quickening of the pace. ...read more.

In this scene both Maire and Yolland try to speak in the same language and fail to, they then speak in their own languages and many matters are perceived differently and misinterpreted. The part where Maire says her feet are wet and the grass must be soaking and then Yolland saying the same thing straight after only differently, is suggesting that the play is quietly insisting that two people can try to employ one same language and still fail to communicate. Also, as was mentioned earlier, that the scene starts with the convincing impression that two cultures and languages can communicate. However the two individuals think, speak and perceive things differently and that the only way to success is learning the language in order to directly communicate. The scene also conveys the message that enthusiasm and desire leads you nowhere, just as was Yolland, nonetheless this took him nowhere near communicating with the Irish and the effect was devastating. In conclusion to this essay Friel has presented this scene in a very effective way and has related this scene to many concerns of the play. Shireen Nowrung 6L5 ...read more.