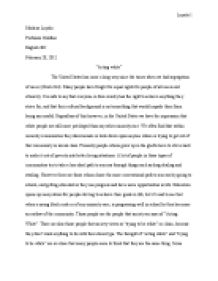 US Society. The terms acting white are used these days to insult someone that is not living by their stereotype.

﻿Loyola Marlene Loyola Professor Goldbar English 302 February 28, 2012 ?Acting white? The United States has come a long way since the times when we had segregation of races ((Buck 644). Many people have fought for equal rights for people of all races and ethnicity. It is safe to say that everyone in this country has the right to achieve anything they strive for, and that their cultural background is not something that would impede them from being successful. Regardless of this however; in the United States we have the impression that white people are still more privileged than any other minority race. We often find that within minority communities they discriminate or look down upon anyone whom is trying to get out of that community or social class. Primarily people whom grow up in the ghetto have to strive hard to make it out of poverty into better living situations. A lot of people in these types of communities try to take a less ideal path to success through things such as drug dealing and stealing. However there are those whom chose the more conventional path to success by going to school, and getting educated so they can progress and have more opportunities in life. Education opens up many doors for people striving to achieve their goals in life, but it?s sad to see that when a young black male or of any minority race, is progressing well in school he then becomes an outlaw of the community. ...read more.

When people don?t act like how people believe they do, they are considered be trying to act like something they are not. The article in the book explains that people of the same race stay together because of historical events that have affected their specific groups of ethnicity. Humans by nature normally stay very close to the communities they were raised in (Buck 641). People are afraid of change and what?s different. People only like to hang out with people that enjoy the same things as themselves (Buck 641). It is natural for a human to become territorial about the people they hang out with. They adapt to them and bond with that person. In any kind of relationships, people carefully select who they want to associate with. The article tells us how people usually only make close relationships with others of their own race. This leads to groups of certain individuals to become competitive with each other so they don?t normally mix (Buck 641). This is why when someone extends their social life to mix with other groups and different races, they tend to be out-casted or insulted by their own race. They begin to view you as a wannabe and that goes back to the concept of them thinking ?they are better.? That?s why people get offended when being accused of trying to be something they are not. ...read more.

In society there are so many different kinds of controversial terms that are used to insult different types of types of race. The gap between equality is considered to be small, but in reality I think that it?s still large (644). I believe that people themselves can?t accept the fact that people can exceed the social community normal. So many different ethnic groups see white people to be considered to be superior. So when they see someone from their community trying to become successful they insult them by claiming they are ?acting white?. When they see someone that is trying to be different from what they grew up the insult them by telling them that they are ?trying to be white? or claiming. If they see appearance change or the way the talk, they simply assume that they don?t want anything to do with their born race. Stepping outside of their stereotype for some reason seems to draw negative attention from their communities. People think one is ?claiming? to be white simply because they are doing well in school and are in pursuit of higher education. They think that they are ?trying to act white? because it?s a personal choice as to how you present yourself and if you chose to present yourself differently than your peers you are ?trying? or ?claiming? to be something you are not. Work Citied Buck, Stuart, comp. Acting White, Signs of life in the USA. Maasik, Solomon, 2012. 637-648. Print. ...read more.