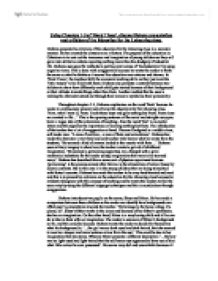 Using Chapters 1-3 of 'Hard Times', discuss Dickens presentation and criticism of the Education for the Labouring class

Using Chapters 1-3 of 'Hard Times', discuss Dickens presentation and criticism of the Education for the Labouring class. Dickens presents his criticism of the education for the labouring class in a sarcastic manner. He has created the classroom as a factory. The purpose of the education in Coketown is to root out the innocence and imagination of young children so they will grow into utilitarian robots expecting nothing more than the drudgery of industrial life. Dickens uses specific methods to put his point across of 'bad education' by using negative views. This is done with exaggeration because he wants the reader to think the same as what he thinks so it seems like education was extreme and intense. In 'Hard Times', the teachers fulfil the excessive teaching skills as they just want the 'little vessels' to be filled with facts. Dickens also presents a contrast between two children to show how differently each child gets treated because of their background or their attitude towards things other than facts. ...read more.

the labouring class because he evidently disagrees with this concept of teaching and he wants the readers to feel the same way by using the different language techniques and this is mostly done through exaggeration. Dickens introduces two pupils on the scene, Sissy and Bitzer. He has made a comparison between these children so the reader can identify how backgrounds can affect pupil's presentation towards the teacher. 'He belongs to the horse-riding, if u please, sir'. Sissy's father works in the circus and because of her father's profession, she has an imagination. On the other hand, Bitzer is a very boring child and all he can do is take in facts with no imagination. The reader is unaware of Bitzer's background so far, and this could be because Dickens wants the reader to decide for themselves what his background is. '...the girl was so dark-eyed and dark-haired, that she seemed to receive a deeper and more lustrous colour from the sun'. ...read more.

This is what Dickens disagreed about because they learnt so much that was worthless and then they would teach and also intimidate young kids with all of the knowledge they have. Overall, Dickens has presented his criticism on the education for the labouring class via many techniques. Some of which are through exaggeration so that the viewer starts to realise that the education was not good in those times. Also with the comparison of Sissy Jupe and Bitzer, because it shows that one is wholesomeness because they still have their imagination to accompany them with the description of themselves and the boldness that Sissy carries, where as the other-Bitzer is pale and boring and can only absorb 'facts' and therefore is lifeless. The symbolism through the name that reflects on the characters of the teachers also supports how bad the education was for the labouring class because their teachers were teaching as if in military school-'he seemed a kind of cannon loaded to the muzzle with facts' Dickens disagreed with the way teachers would train because the majority of what they would learn was irrelevant. ...read more.