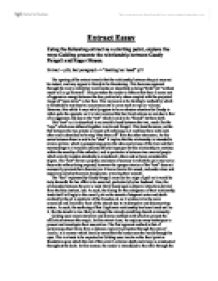 Using the following extract as a starting point, explore the ways Golding presents the relationship between Goody Pangall and Roger Mason.

Extract Essay Using the following extract as a starting point, explore the ways Golding presents the relationship between Goody Pangall and Roger Mason. Extract - p56, last paragraph -> "shaking her head" p57 The opening of the extract reveals that the relationship between the pair may not be mutual, and may appear to Goody to be threatening. This becomes apparent through the way in which her movements are described as being "brisk" yet "without much will to go forward". This provokes the reader to fathom that there is some sort of aggressive energy between the duo, particularly when coupled with the projected image of "open terror" in her face. This may seem to be Golding's method by which to foreshadow any abusive occurrences yet to come such as rape or violence. However, this whilst it may initially appear to be an abusive situation for Goody is infact quite the opposite as it is later revealed that her timid actions are not due to fear of an aggressor, but due to the "tent" which is said to be "feared" by them both. ...read more.

Also, the relationship between the pair is most likely based upon a physical attraction derived from the base instinct, lust. As such, the timing for the emergence of their relationship lends itself willingly to the overall plot as the stench of stagnant water and death emitted by the pit is symbolic of the Freudian id, as it is taken to be the more concealed and inviolable facet of the church due to its disruptive and disconcerting nature. As such, the surfacing of this illegitimate relationship has been timed well as it, like the stench is also likely to disrupt the already crumbling church community. Golding uses many alternative and diverse methods with which to present the affiliation between the couple. In this extract alone, he employs many techniques to present and investigate their association. The first apparent method is that of scrutinising observation from a distance, typically presented through the eyes of Jocelin, in a manner which literally means that the reader sees the world through his eyes. This is almost to be expected as Golding uses Jocelin as the focal point or foundation upon which the rest of the novel's extreme depth and vision is constructed throughout the book. ...read more.

The relationship is clear and obvious in its existence and to Jocelin must have clear meanings as it is stated that "a strange certainty fell on Jocelin" as he spied upon the pair's private meeting. In a somewhat removed and malignant manner, the climax of the relationship between the pair may prophesise and so foreshadows the end for Jocelin. This is due to the manner in which the death or eventual murder of Goody coupled with the severing of Jocelin from all other members of the church body such as Pangall as the "rope" which once "bound" them together has since been "cut", even prior to his disappearance. In this manner it seems that all of Jocelin's "old friends" now scorn or cease contact with him as a result of his blinding ambition. As such, once Goody is no longer alive for Jocelin to lust after and all others have deserted him, the eventual end of his life cannot be far off. Golding therefore uses an intense and diverse array of methods through which to display and enhance every facet of the relationship. As such allowing it to be interpreted and moulded by the reader so that it may be deemed to signify, any meanings ranging from the pedestrian to the fantastic. ...read more.