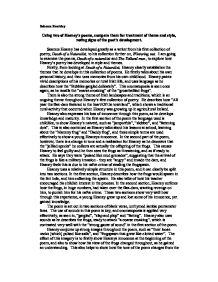 Using two of Heaney's poems, compare them for treatment of theme and style, noting signs of the poet's development.

Rebecca Brackley Using two of Heaney's poems, compare them for treatment of theme and style, noting signs of the poet's development. Seamus Heaney has developed greatly as a writer from his first collection of poetry, Death of a Naturalist, to his collection further on, Wintering out. I am going to examine the poems, Death of a naturalist and The Tollund man, to explore how Heaney's poetry has developed in style and themes. Firstly, from looking at Death of a Naturalist, Heaney clearly establishes the themes that he develops in this collection of poems. He firstly talks about his own personal history, and then uses memories from his own childhood. Heaney paints vivid descriptions of his memories or rural Irish life, and uses language as he describes how the "Bubbles gargled delicately". This onomatopoeia is seen once again, as he recalls the "coarse croaking" of the "gross-bellied frogs". There is also the strong theme of Irish landscapes and traditions, which is an ongoing theme throughout Heaney's first collection of poetry. He describes how "All year the flax-dam festered in the heart/Of the townland", which shows a traditional rural activity that occurred when Heaney was growing up in agricultural Ireland. Heaney also expresses his loss of innocence through this poem, as he develops knowledge and maturity. ...read more.

The effect of this imagery is to firstly show Heaneys innocence at the beginning of the poem, and also to show how his view of the frogs changed throughout, as he gained an understanding. This also helps to show how the tone of the poem changes from the first section to the second and the use of "Then" at the beginning of the second section shows that a change has occurred. Since Heaneys first collection of poetry, Death of a Naturalist, he has developed as a poet, which is evident in his collection of poems, Wintering out. The Tollund man is an example of this development, and is one of the poems about 'the bog people' that Heaney chose to write about. Heaney was inspired after seeing a photograph of the Tollund man, whom was found, preserved in a bog in Aarhus, Denmark. There is a strong theme of religion running through this poem, as The Tollund man was sacrificed to a religion that is much older and darker than Christianity. Heaney talks about the "bridegroom to the goddess", and this shows that in this religion, the sacrificing of bodies was common. This could also be linked to Heaney's personal religion, as in Northern Ireland; people were killed against their will, due to the troubles between the Protestants and the Catholics. ...read more.

Heaney also uses very descriptive language when talking about the Tollund mans appearance at the beginning of the poem. "Peat brown head" is used to show the colour and also the texture of the man, and here Heaney uses images from his own background (peat) to help him describe his appearance. He extends this and continues to use images from the natural world, when he talks about the "pods of his eye lids", which shows the rounded shape of his eyes when closed. He uses sounds to show the pace at some points in the poem, such as when he describes standing "a long time", and the long vowel sounds echoes the meaning. It also shows how mesmerised Heaney is by this Bog person as he cannot help but stare. This sound is much subtler than the onomatopoeia seen in Death of a Naturalist, yet works just as effectively. In conclusion, it is clear that as a poet, Heaney has developed from his first collection of poetry, written in 1966,to the collection named Wintering out in 1972. I feel his style has become subtler and he has chosen to move away slightly from the conventions of poetry, such as rhythm and rhyme. His themes have also varied throughout the collection, yet it is clear one ongoing theme will be the history of Northern Ireland, and his own religion. Death of a naturalist was the starting point of his collection of poetry, and effectively developed the themes that remain prominent in his later collections. ...read more.