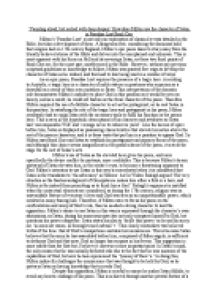 Vaunting aloud, but racked with deep despair How does Milton use the character of Satan in Paradise Lost Book One

﻿?Vaunting aloud, but racked with deep despair? How does Milton use the character of Satan in Paradise Lost Book One Milton?s ?Paradise Lost? is not only an exploration of classical events detailed in the Bible, but also a development of them. A dangerous feat, considering the dominant hold that religion had on 17th century England, Milton?s epic poem dares to stray away from the literally believed stories of the Bible and delves into the unexplained and unknown. This is most apparent with his focus on Hell and its sovereign Satan, as these two focal points of Book One are, for the most part, unreferenced in the Bible. However, without any previous scriptural guidelines or knowledge to follow, Milton was granted free reign to develop the character of Satan as he wished, and this lead to him being used in a number of ways. As an epic poem, Paradise Lost requires the presence of a tragic hero. According to Aristotle, a tragic hero is a character of noble stature or greatness who experiences a downfall as a result of their own mistakes or flaws. ...read more.

Therefore, if Milton were to focus his poem on the confrontation and usurp of God?s rule, then he needed a strong character to lead the opposition. Milton?s desire to use Satan in this way is expressed through the character?s own admissions, as Satan, during his numerous speeches not only compares himself to God, but questions his power altogether. Satan states his plan to ?deifie this power? as he and his army are ?in arms not worse, in foresight much advanc?t.? This clearly contradicts two believed truths of the time: that of God?s omnipotence and also his omniscience. This is because Satan believes that the army he has assembled before him, comprised of fallen angels, is sufficient to dethrone God and that now, God no longer has surprise in his favour. This suggestion is more subtle than the first but; I believe it conveys a more important point. In Satan?s mind, the only reason that he was initially defeated was due to the fact that he was unaware of the capabilities of God, but now he has experienced the ?tyranny of Heav?n.? In doing this, Milton indirectly challenges the omniscience that was thought to be held by God, as he portrays Satan as having knowledge that exceeds God. ...read more.

By portraying Satan as the most human character in Book One, Milton is able to use him as a vehicle to represent contextual issues. During the 17th century, the monarchy had a firm grip on politics and power, but Milton?s own beliefs and loyalties lay with Cromwell and the republican movement. This political ideology is represented clearly in Satan?s speeches, as he frequently refers to the oppressive nature of heaven. As demonstrated previously, Satan already believed in the ?tyranny of Heav?n? and these tyrannous actions are demonstrated by Milton. ?That Glory never shall his wrath or might/ Extort from me? is one reference to this idea, and it alludes to the role of the monarchy at the time. This is by suggesting that those with power use it to extort and corrupt. When considered in the context of the time, this can be interpreted as a criticism of the English monarchy, which had to be conveyed subtly in order to avoid treason. So as demonstrated, the use and functions of Satan are not limited to that of the ?Arch-Enemy.? Through his elaborate descriptions, but subtle hints, Milton is able to set-up the epic battle between God and Satan, and in doing this in Book One he is able to effectively engage the reader in his epic poem. ...read more.