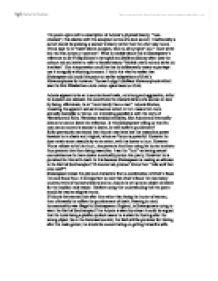 The poem opens with a description of Adonis's physical beauty, "rose-cheeked", this clashes with the accepted norms of a love sonnet. Traditionally a sonnet would be praising a woman's beauty rather than the other way round. Venus says he is "sweet above compare, stain to all nymphs" and " more white and red than doves or roses are". What is notable about this is Shakespeare's reference to Sir Philip Sidney's Astrophil and Stella as Sidney often uses the colours red and white to refer to female beauty "Marble mix'd red and white do interlace". One interpretation could be that he deliberately means to perhaps use it to signify a blushing innocent. ...read more.

Adonis blushes, revealing his apparent sexual innocence which in turn makes him more sexually desirable to Venus. An interesting parallel is with the story of Narcissus and Echo. Narcissus avoided sexuality, like Adonis and eventually dies as he cannot leave his reflection. Is this Shakespeare telling us that if a man cannot control a woman's desire, he will suffer a punishment? Kelly previously mentioned that Adonis may have lost his masculine power because he is chaste and virginal, where as Venus is powerful. However he does retain some masculinity to an extent, with his desire to hunt. However Venus refuses to let him hunt , she prevents him from using his hunter instincts thus prevents him from being masculine. ...read more.

It is important to note that Ovid's Book Ten has heavy undercurrents of homoeroticisms and so Adonis is set up as an object of desire for the implied male reader. I believe using this understanding that the poem should be read as slightly ironic. If Adonis lets women lust after him rather than being the hunter of women, then ultimately he suffers the punishement of death. Bearing in mind homosexuality was illegal in Shakespearen England, is Shakespreare trying to warn the Earl of Southampton? As Adonis is slain by a boar it could be argued that the tusks being a phallic symbol means he is slain for lusting after the wrong object. So in the historical context, the Earl will be punished for lusting after the male gender, he should be concentrating on getting himself a wife. ...read more.